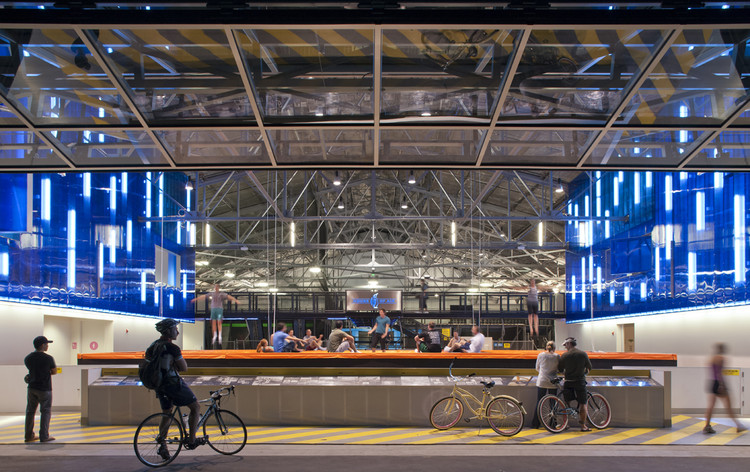 Text description provided by the architects. House of Air, started in 2010 by two young entrepreneurs interested in the action sports world, is a trampoline facility that caters to the discriminating taste of the young, energetic and affluent population of active San Francisco. The breathtaking site is at the foot of the Golden Gate Bridge and in the Golden Gate National Park, with expansive views out to the San Francisco Bay that become even more apparent when the 45' wide glazed hanger door is opened. Inside the historic biplane hanger, a large field trampoline for bouncing sits along side a trampoline dodge ball court and three performance trampolines used for both competitive jumping as well as ski / snowboard / wakeboard training. Flanking the trampoline area are two pavilions housing a café, meeting facilities, lockers, and a lounge. Translucent blue walls lit from within are graphic interpretations of the vertical motion which takes place throughout the facility.

The client’s original objectives were purely to construct and operate a facility that could accommodate their business plan. The architect’s objectives were to create a space that would act as a branding device in a visual manner, thus elevating what could otherwise have been a base commercial experience to a level matching the sophisticated site and clientele. Through the use of relatively inexpensive construction materials and methods, the final product is a distinctive environment that registers as a lasting visual impression on visiting customers.

Architecturally, the hanger remains a large single long-span structure, with free-standing elements installed within it. A very large glazed overhead bi-fold door at one end of the building fronts onto the historic Crissy Field landing strip, the San Francisco Bay beyond, and downtown San Francisco in the distance. Internally, this large oculus is flanked by structurally-independent pavilions housing discreet programmatic elements, clad in translucent blue polycarbonate. Large openings in these walls are modulated with pivoting panels, to provide privacy to the interior rooms. A structural steel catwalk connecting the upper floors of the pavilions allows for elevated vantage points from which to observe the trampoline activity below.

The renovation and remodeling of the existing historic hanger was no small task. The existing building is a lightweight steel structure sitting on natural landfill prone to liquifaction in a seismic zone. When the six inch thick solid concrete roof structure (bomb-proof by 1920’s standards!) is added to the equation, and required to be kept in place during seismic shaking, it becomes quickly apparent that the building was in need of significant bracing and upgrade. Combining the seismic upgrade with the historic requirements of the building was a significant challenge; grout-injecting concrete to allow the original concrete to remain in place and once again become structurally sound, separating structural loads for the new work from the historic structure, and adding structural members to the original building in a way that would respect the historic structure as originally designed, were all tasks which the design and construction team had to address.

In addition to stabilizing the structure in place, a large amount of time and energy was spent addressing toxic concerns. An airplane hanger, owned by the military for almost 90 years, can only be assumed to be toxic. Lead paint, aviation fuel, and asbestos seemed to be present on almost every surface of the building at the start of the project. A comprehensive plan to address all of these conditions, with a tremendous amount of work on the part of the general contractor, resulted in a final, usable, and clean, public building.

As a result of the work performed, an historic building was re-purposed and put back into use for The Presidio Trust, the entity formed by Congress to both preserve the Presidio’s natural, scenic, cultural, and recreational resources, and to shape them in a way that would allow them to become financially self-sufficient. 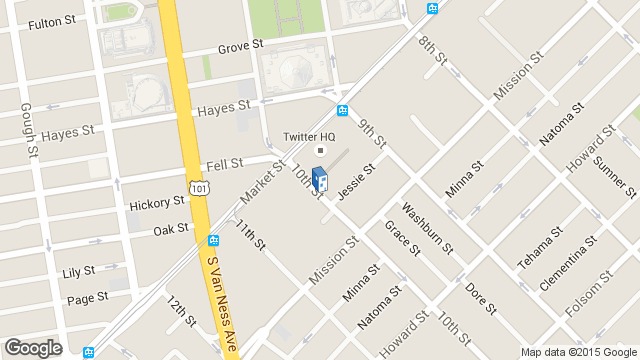 Location to be used only as a reference. It could indicate city/country but not exact address.
Share
Or
Copy
About this office
Mark Horton - Architecture
Office
•••