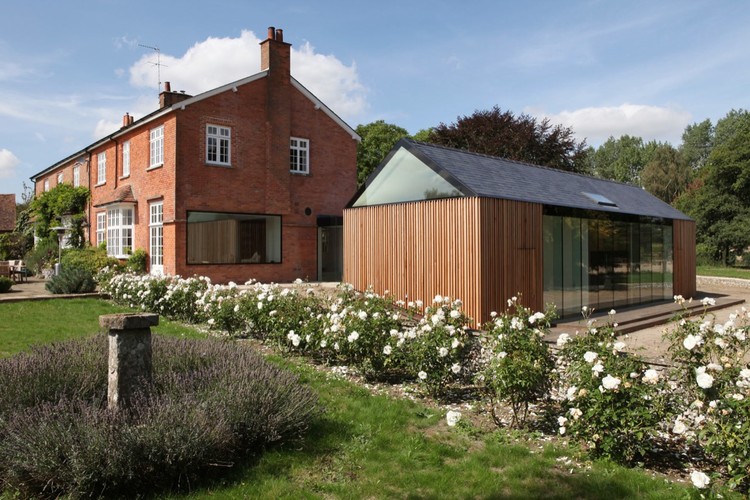 Text description provided by the architects. An entrepreneurial couple approached us with 5 children, a sixth on the way and a number of pets, to help them refurbish the house they had just bought on a 20-acre estate in Berkshire. The house, dating from the 19th century, had been added on to in a piece meal fashion by various owners with very mixed results. This resulted in a series of awkwardly arranged and disconnected rooms that were very dark and did not suit modern family life.

Our brief was twofold: first, to rationalise the internal layout of the existing house while maximizing the views onto the garden and grounds; and secondly to increase the living accommodation by adding an extension. This would balance the existing L-shaped plan of the house with an additional wing to enclose the front driveway.

The extension is set on a lower part of the garden, which allowed us to create high ceilinged spaces, without the addition dominating the main house. The form of the building is drawn from the typical barn structures that can be found in the local area as well as on the estate itself. The short elevations are clad with western red cedar strips apart from the fixed triangular glazed gables at high level. Three vertical strip windows break up the cedar cladding on the driveway elevation, bringing light into the family room and providing glimpses to the garden beyond.

The garden elevation is glazed from floor to ceiling for most of its length; with cedar clad doors creating access to the patio and lower garden beyond. Internally the long space is divided in the middle by a two-story block, which houses the gym and an office above. At one end is the family room and at the other a large movie room with an 84” screen. The roof of the extension is clad in slate tiles to match the existing house; however, it is detailed in a contemporary way so that it creates crisp junctions with the glazing and timber cladding. 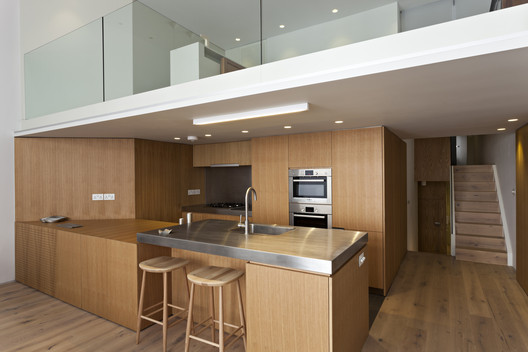 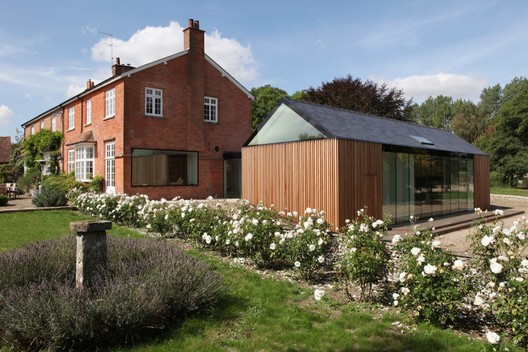