Text description provided by the architects. This project is located in the Gebze/Kocaeli Tübitak MAM (Marmara Research Center) area. The fact that the present operational structure of the company demanded a campus style layout which relies on the coalescence of office space, recreational areas and meeting and service facilities, led us to a more diverse design concept rather than a conventional office building.

When CM Mimarlık  first saw the site, the element that caught our attention and therefore became one of the major design criteria, was the landscape sloping south with a 10% gradient, towards a wooded area and the Marmara Sea (bay). Another important design criterion was the need to divide the construction process into two stages. At the beginning of the design process, both the (requirement program) and the work schedule included a two staged construction period. Primarily, the larger project was to be designed and built while the second project’s construction was to begin only after the first stage was completed. This way of planning required project plans for both the separate stages of construction as well as for the unified outcome we aimed to reach. There were two major difficulties concerning this scenario. The first problem was the need to isolate the construction of the second stage from the already finished and operating first stage. The second difficulty was the need to properly integrate the two parts in a way that no seams could be recognized.

The main entrance, which is connected to the road with a bridge, is designed as a separate steel construction unit between blocks A and B. This separate unit provides a much easier orientation for visitors and for the working personnel. On the other hand, the building’s secondary entrance and the entrance to the parking garage are located on the southern façade of block C which is located on the lower level of the parcel.

The connections between the three blocks are provided by three single and one double decked steel bridges; four in total, whose lengths vary between 14 and 17 meters depending on the need of horizontal circulation. The building blocks create an open courtyard between them which faces the landscape to the southeast. The courtyard mainly serves as a recreational space and is in close proximity to other spaces such as the cafeteria, fitness room, swimming pool and the dining hall, all located on the ground level.

After the excavation and construction, a ground restoration, with the aim of preserving the natural 10% slope, is carried out. The aluminium façade system, the partial roof slope, window openings and main contours of the façades are all referenced to this natural slope of the terrain. In order to lighten the mass of the blocks, terraces for the offices are created by pulling back certain floors on the endings facing the landscape. The cafe, located in the block B, is connected to the courtyard with stairs descending through a void on its ground. Just like the open courtyard and the relations it creates between several parts of the building, through the use of open terraces and connections with the terrain, we wanted the building to have strong interactions with the environment it is located in.

The entrance façade and the northern facade are clearly designed to be more massive than the other façades thus creating a strong contrast. The southwestern façade on the other hand, has a unique character of its own because of the need deriving from the functions located on that side of the building. Here, a more controlled glass façade with a dotted texture is chosen in order to filter the effects of the sunlight to a certain extent.

The horizontal circulation of the offices designed with the façades facing the courtyard, together with the bridges connecting the three different blocks are the main elements of the circulation scheme which is clearly of vital importance in a building consisting of three different parts yet operating as a single enterprise. The plans to divide the construction into two stages were abandoned after the start of the process and all the blocks were simultaneously constructed as single complex. 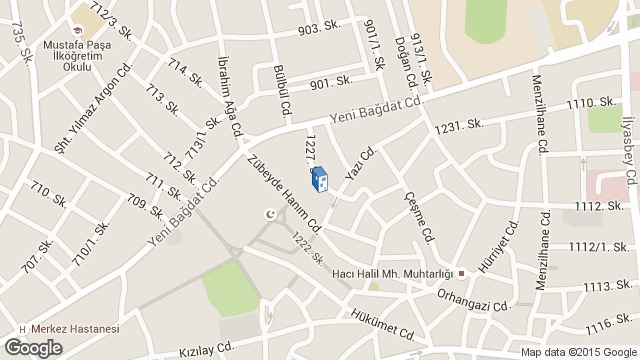