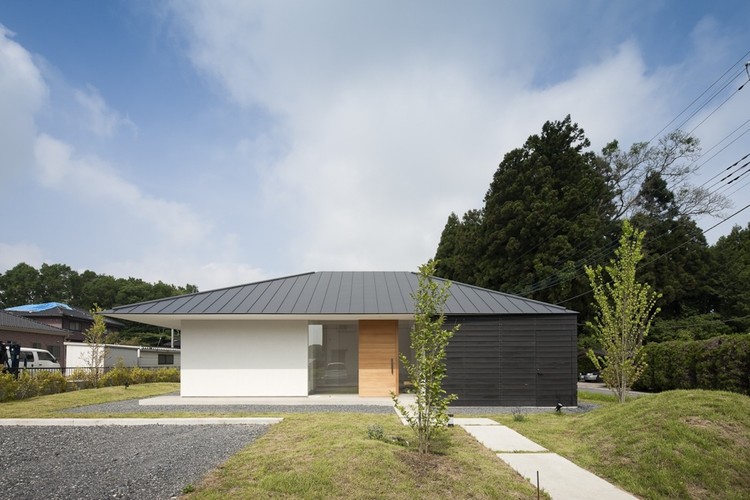 Text description provided by the architects. This project was a residential building for a husband-and-wife couple in rural Ibaraki prefecture. The area surrounding the generously-sized plot was not heavily built up, giving the site a calm sense of privacy without too much of the noise, threat of crime and other stresses associated with the city. The adjacent areas consisted of a mix of fields and houses, many of which were located on plots of land whose boundaries were not clearly demarcated from each other. With these conditions in mind, we decided to create a home that would consist of “an open space with ambiguous borders and boundaries.”

We started by encircling the perimeter of the site with greenery and embankments in order to demarcate the boundaries of the property in a loose fashion, and built a one-story house that would be covered and hidden by them. In this way, we were able to create a site that makes no distinctions whatsoever between its interior and exterior, or between the architecture and its surrounding environment. The embankments serve as a catalyst to produce changes in the landscape visible from the interior, as well as the view from the outside of the house.

The flat, level surface of the site gives the residence a functional layout, while the internal courtyard produces a sensation of depth and fluidity within the house. Situated at a slight distance from the center of the roof, the courtyard also produces variations in the gradient of the ceiling and configuration of the rooms, giving rise to subtle gradations in the overall spatial properties of the house.

A sense of dialogue between the interior and exterior is reiterated in the internal courtyard and various spaces underneath the eaves of the roof, allowing sunlight and wind to pass through the space. We also used the various fittings, eaves and dirt floor as tools for manipulating the boundaries within the house, which maintained both a sense of distance from its surroundings as well as a certain relationship to them. By emphasizing the supporting function of the roof and keeping all the sliding doors and other fittings fully open, the interior of the house acquires a certain spatial intensity. The view from the outside, on the other hand, gives the impression of a wide mantle that covers the entire house. All of these measures allowed us to ensure that the residence would have a sense of spacious comfort where both nature and architecture are accorded equal value.

In the future, we hope to continue building homes conducive to this sort of luxury and comfort, creating a simple sort of architecture that seeks to actively open itself up to changes in the four seasons, shifts in the weather and the passage of time in a symbiotic relationship with nature, all without having to rely on the latest building technologies, machinery and devices.