Text description provided by the architects. The Performing Arts Pavilion addition by Stephen Dynia Architects (Arts Design Collaborative) fits seamlessly into the rest of the Jackson Center for the Arts building, and makes the most of its natural Wyoming setting. The 35,000 square foot addition was completed in 2007. It contains music practice rooms and theatre support areas, but features its flexible theatre and open lobby in design and function.

The Center required a new theatre to fit a range of production styles in the addition. The solution by Stephen Dynia Architects is a 500 person theatre on two levels. The balcony level more than doubles the capacity of the theatre when used. Its 300 seats are accessed from the ground floor and not used for smaller performances. For these performances, just the 200 seat orchestra level is used.

The theatre is an asset for the community, and the lobby below connects it to Jackson. The space is an open area for people to access the theatre, while taking in views of Jackson outside. An uninterrupted glass façade allows views into the bustling theatre, and encourages patrons to look out onto the mountains within view.

The glass façade was achieved by hanging the balcony level of the theatre above the lobby. The sculptural wooden underbelly of the balcony becomes a feature ceiling in the lobby, and in the building. Outside, the green slopes down to the level of the lobby and forms another outdoor auditorium. It further connects the interior and exterior and allows for casual performances in a special setting.

Along with the glass façade, Stephen Dynia Architects used exposed concrete and wood slat siding on the exterior to blend with the existing Arts and Education facility. The material choices also reflect the natural setting of the Center. The Performing Arts Pavilion capitalizes on its beautiful setting by drawing it into its lobby, an added benefit for the Jackson community making use of their impressive new theatre. 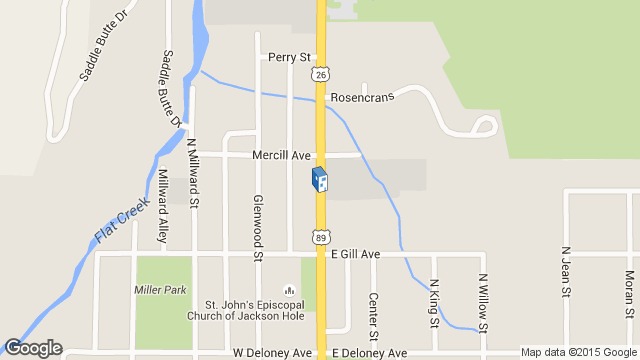 Location to be used only as a reference. It could indicate city/country but not exact address.
Share
Or
Copy
About this office
Stephen Dynia Architects (Arts Design Collaborative)
Office
••• 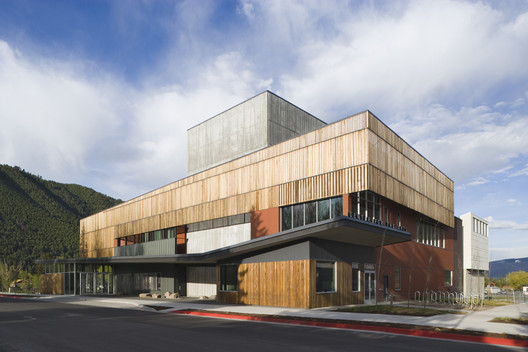