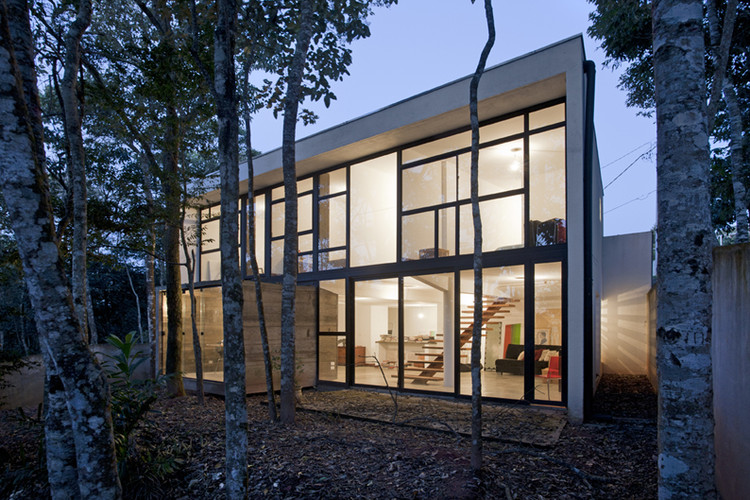 Text description provided by the architects. The proposed project for this residence, located in a gated community in the city of Mogi das Cruzes, was designed for an architect, his wife and kid. It was proposed that the construction should be done in stages, according to the family growth. Sustainability of its use was also considered in the project. The sloping terrain has a forest of native trees at the lower part of the plot, making the first block more suitable for occupation to be done on two levels, therefore preserving as many species of trees as possible. And at a later stage, an expansion of another block in the lower part of the plot, dedicated to children.

As a first step, the ground floor was defined as the bedrooms area and the lower floor as the social area, with access to the woods. The main part of the house opens onto landscaping at the back, in the future its closure would compose of a mixture of materials, wood and glass, while maintaining a visual transparency.

While the front of the proposed house, a less closed effect consisting of masonry and glass would be used, allowing for intimacy of the bedroom. On both fronts we can see the portico formed by the cantilevered eaves and gables of the bigger sides.

Two elements in battened concrete stand out from the rest of the main house: The future entrance area, at ground floor level, access is by a ramp, and the future dining room at a lower level.

For the second step, the bedroom area is independent, and is linked to the main construction and is made from a wooden walkway, without interfering with the natural terrain. Situated in an area of native vegetation, it was thought of implementing measures that reduce the impact on the local ecosystem while providing a pleasant and healthy environment for its new residents. The entrances to the house should favor cross-breeze. The woods in the back of the land are preserved, maintaining a pleasant temperature, creating shaded areas and protecting the construction from wind and direct sunlight. The rainwater is stored in its own reservoir and reused for the care and cleaning of the gardens. As the condo has no sewage network, it goes through a treatment system on the same lot.

We can then conceive an integrated environment between the built areas and green areas, with less impact on the environment and more sustainability, where both natural views and buildings are being worked upon together and the materials used and chosen with the well-being of the residents in mind. 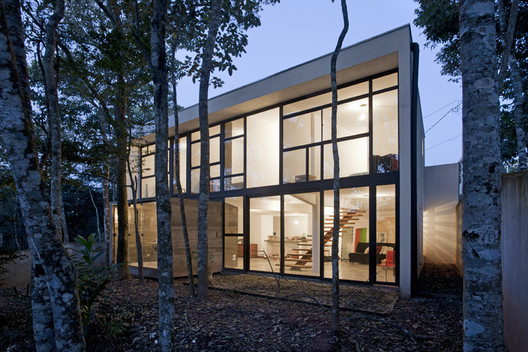