Save
The Decaying Dutch Harbor Bunkers
Share
Or
Copy

Set against a backdrop typically reserved for postcards, the decaying bunkers of the Aleutian Islands Campaign serve to memorialize a little-known chapter of WWII lore. Read more about these distinctive relics after the break. 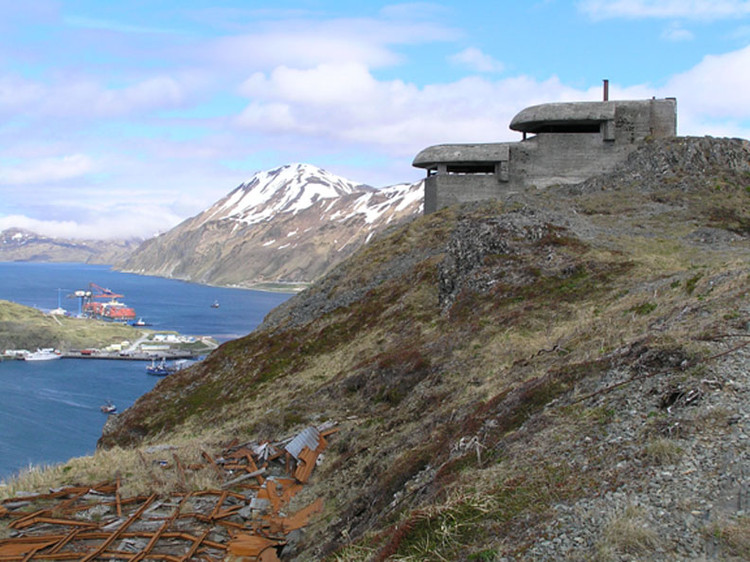 To provide a bit of historical context: the Aleutian Islands Campaign, which began in early June 1943, involved a struggle to regain American control of the remote islands of Attu and Kiska during the Pacific Campaign of WWII. Beginning in 1941, the US Army constructed over 100 buildings to secure the Dutch Harbor Naval Operating Base. Included are the bunkers and observation posts featured here, most of which are situated at Ulakta Head on Mount Ballyhoo. At 897 feat above sea level, these installations remain the highest coastal defense stations built in the United States.

The Aleutian Islands Campaign itself is ripe with incredible, albeit lesser known, stories of victory in the face of adversity. While still in their own backyard, so to speak, American soldiers struggled to defend an unfamiliar sector of their nation. A young editor for a regional Army newspaper at the time, Dashiell Hammett, who also authored The Maltese Falcon, noted “Modern armies had never fought on any field that was like the Aleutians. We would have to learn as we went along, how to live and fight and win in this new land, the least-known part of our America.” Along with extra gear and rations came a different approach to building than had been previously seen in the domestic war theater.

The bunkers themselves are architecturally unremarkable. Constructed almost entirely of steel reinforced concrete, they were designed to be, above all else, steadfast in their operation. Originally, the corps of engineers designed the concrete observation posts and command stations to withstand both earthquakes and gale-force winds. For this reason, they have long out-stood the other wooden bunkers in the area. For more information about visiting the Dutch Harbor Bunkers, please visit the National Park Service.