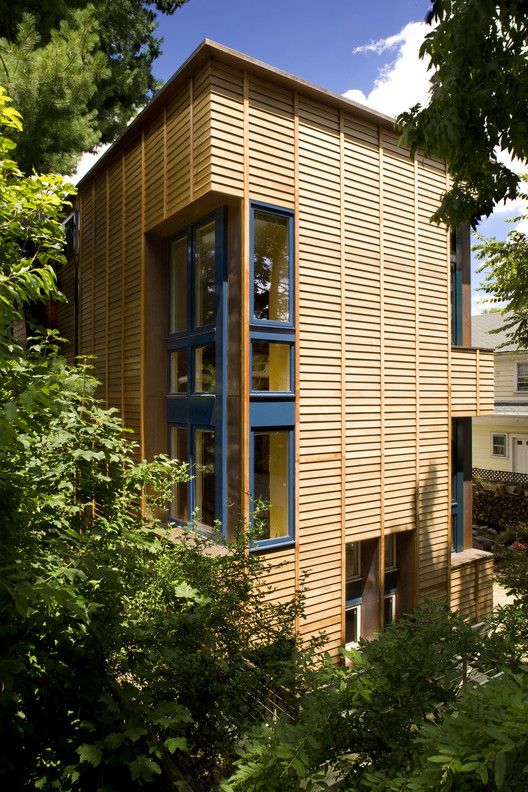 Text description provided by the architects. The Eastside Addition in Providence, designed by 3six0 Architecture, is a 2-story addition to a Rhode Island home built in the 1920's, reflecting the lifelong conversation of a couple that has had mutual and disconnected desires. Having finished raising a family, the couple decided to enlarge and reorganize their current home to accommodate their new lives. He is a graphic designer and avid collector of books, while she is a lover of plants and gardens. For years every nook and cranny of the house has been filled with their collection of books and memorabilia, and now with the new addition, they can enjoy open, well-organized space.

The innate oppositions of the project were the source of the concept: books vs. plants, storage vs. space, light vs. shade, library vs. garden, systematic organization vs. informal experience, and privacy vs. engagement of the outside.

A framework was formed of deep, equally spaced fins. The depth of the fins forms a protective zone, creating a deep private enclosure. The fin's depth, adjusted to accommodate a bookcase, fulfills the many conflicting programmatic needs. Book storage and file cabinets fill much of the space in the library, wardrobe, and the new master bedroom. The east wall of the library became a plant conservatory, with the deep fins preventing direct sunlight from falling too far into the room. The fins themselves are conceived as infrastructure, ducting air and forming lights. Symbolically, the fin-based module gives a sense of measure, order, and unity; a very satisfying way of understanding the space.

Windows are sized and located according to the fins system, operable ones placed on the inner, more easily reached face of the "thick blank," and fixed ones on the outer face. Windows are also calibrated to screen neighbors, but yet capture garden views. Because of the depth of the fin wall, windows can precisely control undesired views. Upstairs in the master bedroom, the eastern corner of the ceiling is lifted in a veil-like fashion allowing the corner window to rise in response to the sunrise. This corner has become a contemplative spot with the opposite western corner, where its window reaches to the floor, providing a place to read and overlook the old beech and pine trees.

Both the lower level and rooftop of the addition are vital parts of the design. The new addition provides a discrete treetop deck for plants and family gathering, affording distant views of the Rhode Island countryside. The lower, basement level was envisioned as a working/living space; light filters through glass flooring above in the conservatory space, as well as the garden window and door.

The connection between addition and house is paradoxical. the addition, expressed as a distinct pavilion in terms of form and syntax, nevertheless shares a material palette with the existing house. On the interior a distinct windowed connector bridges between old and new, yet the renovation of the kitchen and dining area has blurred the seam between new and old. 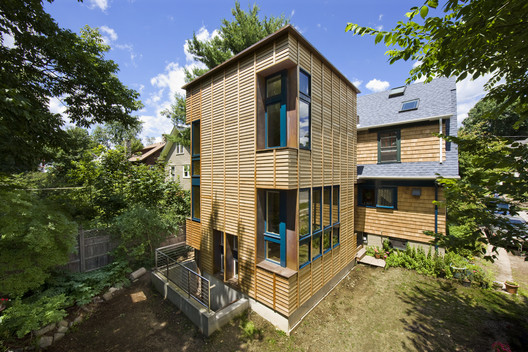