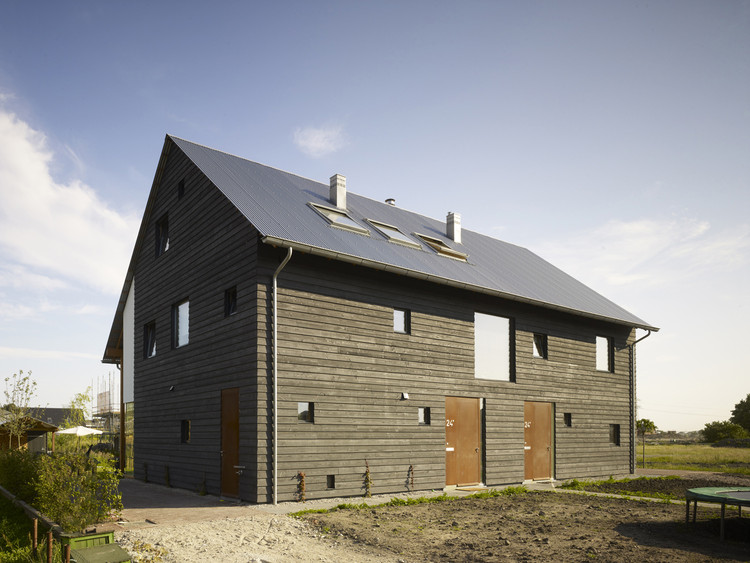 Text description provided by the architects. This project called for a semi-detached house, a double dwelling for two families. The double dwelling was designed, developed and realized by architect Robert Alewijnse and designed as a singular architectonic object, housing two completely different homes. The eastern home was specifically designed for the architect's family and the western home was sold and adapted to the specific wishes of the new owners.

The houses and farms on Lookwatering Den Hoorn (ZH) overlook the Look waterway. This double dwelling is surrounded by vast greenhouses and barns, and is built on former horticultural grounds. Slowly but surely the greenhouses are being replaced, and the area is developing into a residential neighborhood known as Look-West Noord. An important and recurring theme for most of the new homes in this neighborhood is the presence of water. The double dwelling is located directly on the border of the old circuits and the new residential area, and will be surrounded by water on three sides. In the future, the lot will serve as a cap for the wider canal.

The design makes a direct reference to the black wooden barns with their corrugated roofs common to the region. The northern façade addresses the road, is relatively closed and is finished in black wood. The south-eastern end faces the waterways and the gardens and is completely transparent. It is here that the barn is opened up, blurring the boundaries between inside and outside. The white stuccoed volumes and walls pierce through the glass and the wide veranda creates a proper exterior-interior transition.

In the name of sustainability, the dwellings are designed as energy passive homes. By designing the façades in keeping with the sun, the favorable morning sun is caught, and the veranda shades the spaces from harsh afternoon and evening sun. The roof and the walls are heavily insulated and the plumbing is equipped with heat recovery mechanisms.