Save
St. Emanuel House / Ronnie Self 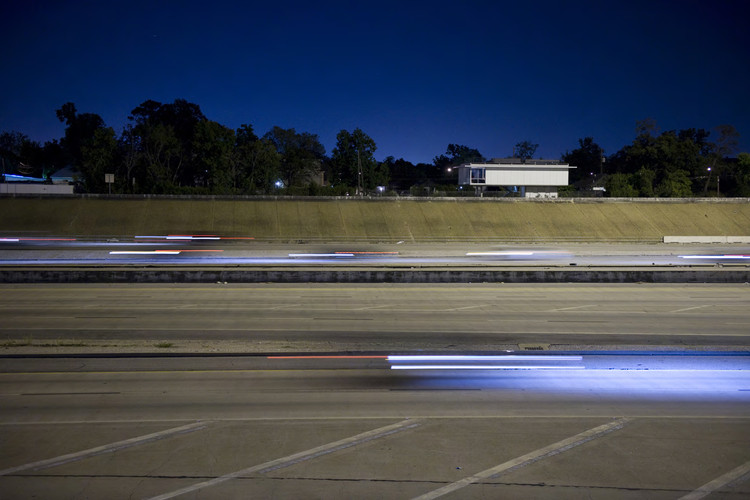 The minimal design of the elevated St. Emanuel House by Ronnie Self allows for maximum interaction between his home and the surrounding diversity of elements.

The uplifted cast in place concrete slab leaves almost no footprint on the sight; only a small storage space and stair lightly touching down disrupt the landscaping. The resultant raised program helps to produce the extraordinary views of the city while also increasing privacy from the street level.  The exterior is clad in HardiePanel and follows a pattern of standard dimensions. A notch on the north elevation corresponds to a large built-in bookshelf in the main living space and is a direct representation of the significance of the client’s vastly impressive book collection.

At first look, the house appears rectangular in plan. But after further examination, it is clear that the plan actually mimics the shape of the lot, which has a splayed Western edge. The house favors this freeway side of the lot, as opposed to the neighborhood side, which under any other circumstances would seem counterintuitive. However, the thought process behind such becomes evident once one becomes acquainted with the view it helps to create.

The basic plan consists of a steel staircase penetrating through the entire home, with the rest of the program more or less revolving around this central element. Upon entering the residence, one steps into the living room and is immediately greeted by five floor-to-ceiling glass panes in the Northwest corner. These windows overlook the convergence of two busy freeways and downtown in the distance. The constant flow of cars passing by creates an ever changing terrain, like that of a flowing river, in juxtaposition to the stoic Houston skyline. The bedroom layout is in the spirit of a more European residential program, with two bedrooms that act purely as sleeping chambers, void of closets and even doors. These rooms sandwich a single bathroom and lead to supplying the long, adjacent hallway with one entire wall of storage closets.

A large ipe wood deck covers the entire roof plane and gives way to an open, panoramic view.  The only element jutting through the roof deck besides the stair set itself is a lifted portion acting as a clerestory to the bathroom below it. The roof ultimately becomes a fully experiential place with its view of the lively city, the sound of the active freeway, the smell of the surrounding vegetation and neighborhood, and the feel of the sun and breeze.

The Kitchen boasts windows on both sides; one overlooking the yard and neighborhood beyond, while the opposite one looks through the stair set to the study on the other side of the home. The amount and placement of windows make the house a kind of tool for viewing different scales of movement: from dynamic city, to quiet neighborhood, to introspectively back in on the very residence itself.

In the end, the design for the St. Emanuel House is a perfect balance between thought-out and hands-on, becoming an appropriate representation of the client/architect in addition to the city it is constantly interacting with.