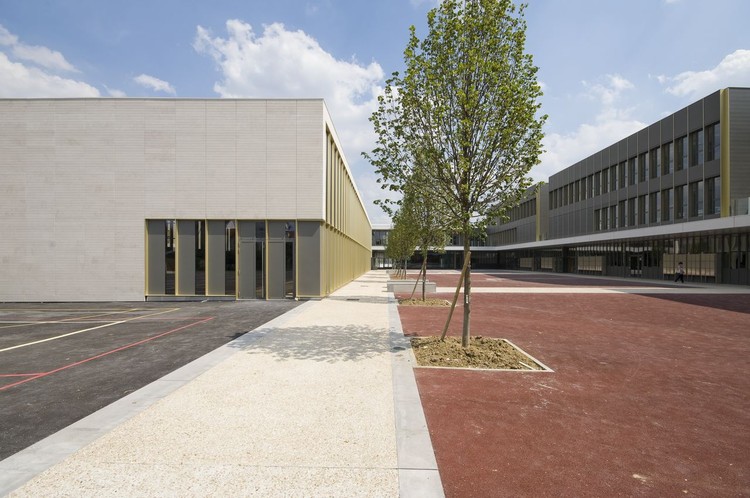 Text description provided by the architects. Often the construction of a high school creates a shift in scale and typology of the urban tissue. The new Jean Perrin High School shelters 632 students and 32 interns in the heart of a housing district in the city of Nanterre. The design proposed by Brenac & Gonzalez integrates the urban dimension, the typology of the site and creates a special relationship with its surroundings.

The plot is a long rectangle that stretches deep into the urban tissue and tapers towards the interior; there is only one possibility to enter the terrain, on its narrowest part, on the “Goulvents” rue. The main volume of the project is a linear building that occupies the entire depth of the site and contains all the classrooms. Its asymmetrical position creates two types of exterior spaces: a service yard and two other courts. One of these spaces is related to the entry level of the building and a second one is dedicated to the students.

The first court slopes gently towards the lobby, transitioning towards the interior space. The second court is home to the playground, which by its size, configuration and arrangement of buildings, relates to the proportions of a great city square (25x80metres), with its trees, benches and lampposts.

The entry lobby, a transparent volume meant to facilitate the perception of the site's depth, makes the transition between these two exterior spaces. Continuity and spatial fluidity is enhanced by the absence of poles in the lobby, using a bridge structure instead. Other elements of continuity is the ceiling, which extends outwards to include the exterior space and the ground material, Italian limestone, used throughout the building.

In front of the classrooms building, the other side of the courtyard is occupied by the gym where the basic shape of the openings and the vertical rhythm of the façade reinforce the monumentality of the volume. Bordering the playground, the third volume is the restaurant, designed to be as transparent as possible, creating a porous border for the spatial composition and permitting views of the context. Just next to the restaurant, taking advantage of a lateral expansion of the plot, the building of the boarding school has its natural place apart, protected from the rest of the site by a green belt of vegetation. 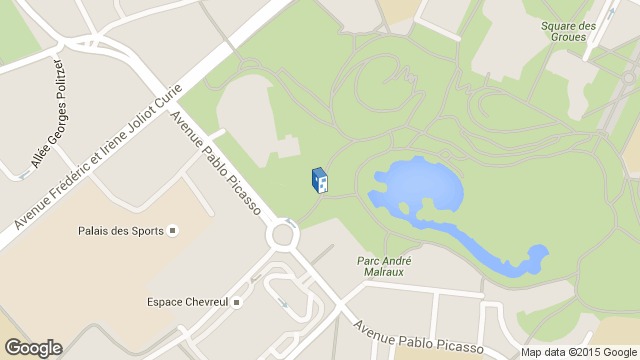 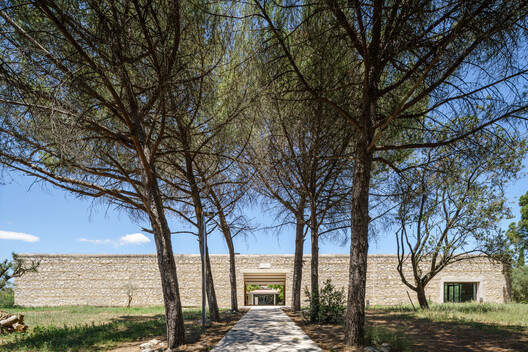 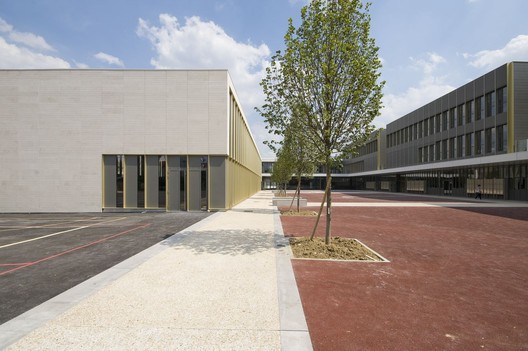