Most design and building processes relay on pre-determination and accuracy, plus an efficient coordination of data input leading to a physical realization representing previously conceived ideas as closely as possible. Parametric and generative design add an extra element of “objective” formulae playing role of legitimizations of designer’s intentional design, while the choice of data pools, algorithms or auto-generative formulae is in fact another intentional element. 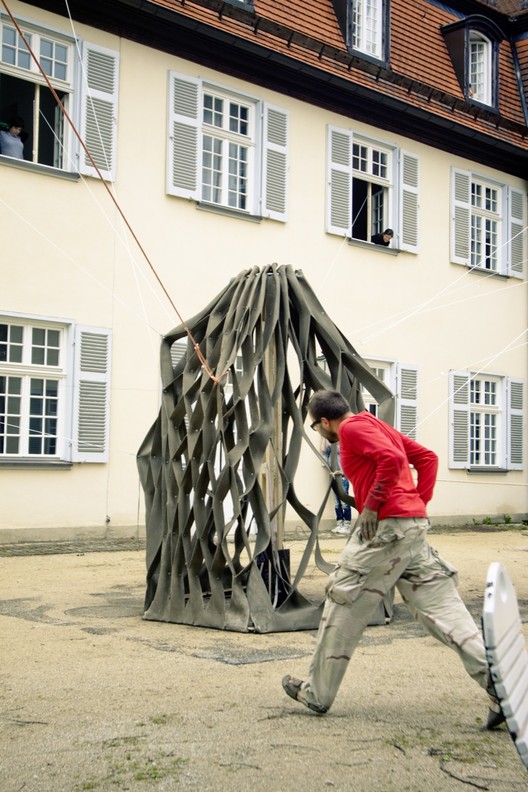 The aim of the project is to visualize, in a way as direct as possible, the interaction between input, symbolized by stretching power and length, and output, depicted by the deformation of the surface and volume of the structure. Project took place during a residency in Schloss Solitude in Stuttgart with invited residents and employees of the institution placed along walls and in the studios along castle’s courtyard. The stretching was done by pulling cords ( based on dice throwing) attached to randomly chosen nods of the structure. A dodecahedron dice thrown by the author designated next players with numbers from one to twelve, who had right to pull each time a length of one forearm. The pre-cut set of five 105 x 300cm sheets of 5mm thick concrete cloth, attached on top and tied to the groung was than formed in order to gain maximum possible volume through obtaining a peak point of possible stretch.

After a half-an-hour game a final form was obtained. All players stabilized their cord and the structure was prepared for watering through bending all it’s sections. It took five hours to stiffen the concrete powder contained in the inner layer of the material. After removing the mounting column, strings were cut off during the opening in Schloss Solitude’s courtyard, with institution’s director standing inside the pavilion with a helmet on his head. To public ovation structure remained still and stable leaving the director harmless: the experiment was a success and a next step in the development of the project into greater scale, bigger spans, different locations and, inevitably different social contextes.