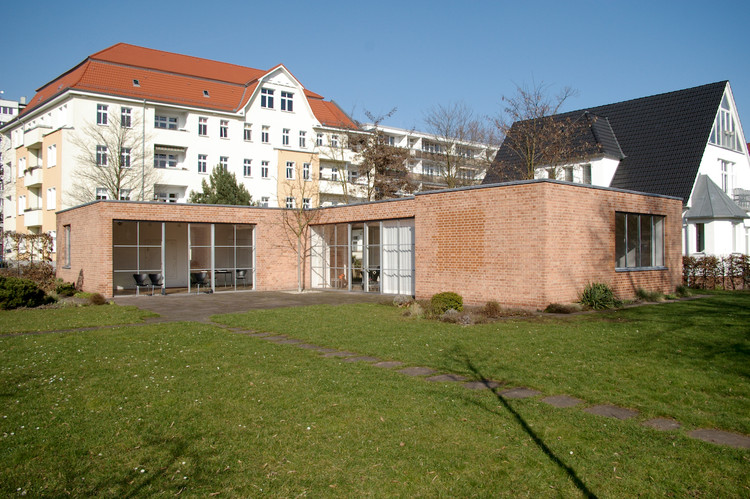 Text description provided by the architects. The Landhaus Lemke private residence by Mies van der Rohe exudes the crisp, clean and formal aesthetics that are characteristic of his architectural proclivity. Built in 1933 for Karl and Martha Lemke, the house is rich with history and encompasses a storied past.

Located on the banks of Lake Obersee in the city of Berlin, its life began in 1930 when the Lemke’s purchased a double sized plot of land. Mies was solicited to design the residence, with construction commencing in August of 1932. During this time, he was also working as the director of the Bauhaus.

His current research and developing philosophy of the courtyard house is elegantly illustrated in the design of the Lemke residence, and remains his only realized example of this typology. It would also mark his final project in Germany before emigrating to the United States in 1938.

Built of solid masonry construction, the design is simple and functional, while simultaneously incorporating a harmonious balance of interior and exterior spaces. Large glazed openings embrace the lakeside exterior, while smaller windows on the street side ensure privacy.

An L-shaped plan defines the volume that encompasses an open courtyard and terrace facing Lake Obersee. Upon entry, a pair of glazed doors on the left lead to the private sections of the house including a studio/study and bedroom. Wooden doors lead to the communal areas that include the living room with direct views to the lake, and the kitchen and utility rooms on the streetside wall.

The main experience and highlight of this building lie in the studio with views to the west and the living room space with views to the south, that feature floor to ceiling glazing and open onto an exterior terrace. The two spaces, while physically disjointed are visually connected via sightlines across the shared terrace. Built-in glazed doors in the window walls allow access to the exterior from both spaces.

The detailing and construction of the window framing system is a clear example of his famous quotes; “god is in the details,” and “less is more.” It serves to complement the unobstructed view to the exterior through thin profile mullions forming equal square shapes, each providing a framed view of the lake.

The overall cleanliness and simplicity is enhanced by the mono materialistic approach of the local red brick facade. Free from pastiche ornamentation, the façade and glazing seamlessly blend into the landscaped garden designed by the office of Karl Foerster. Interior spaces were furnished with pieces designed by Mies himself and Lilly Riech. In staying true to the limited material palette, the furniture of each room was designed with a single wood and limited accenting with yellow pigskin parchment.

Of particular interest is the rich history that the residence has been through. The Lemkes resided here until 1945, at which point they were forced out by the Soviet army and the house was converted into a garage. During the 1960’s, the Staatssicherheitsdienst of the GDR utilized the house for laundry storage and janitor living quarters amongst other unintended uses. As a result, the structure sustained extensive damage and underwent numerous alterations, including the bricking in of some of the terrace windows.

In 1977, the building was declared a protected landmark, which safeguarded it from further despoilment. It has since undergone a significant restoration of both the house and garden from 2000-2002.

The Landhaus Lemke lends testament to the beauty inherent in modern minimalist architecture. Mies refined detailing for spaces that link interior and exterior creates a fluid and congruous experience. If ever in Berlin, be sure to visit the house, which is open to the public.