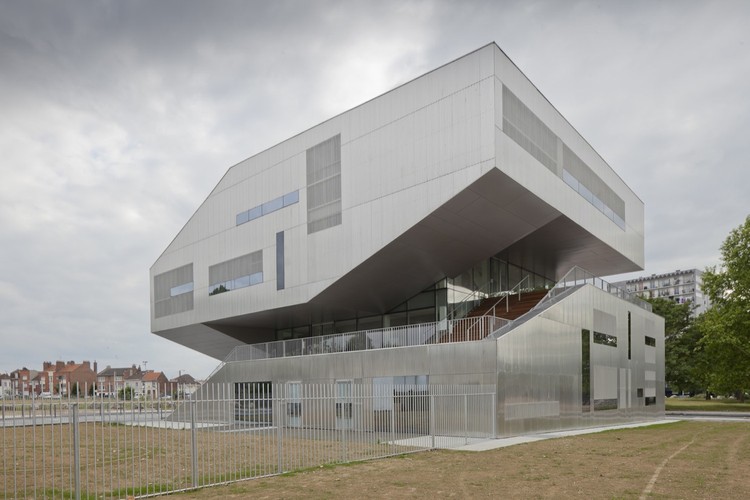 Text description provided by the architects. It’s impossible not to notice the L’Arbrisseau neighborhood centre in the southern suburbs of Lille. Its helical shape, the staircase that winds itself up around the sides of the building and its aluminium cladding, like a space vessel’s, all make it stand out. They create a contrast with a rather disjointed and sometimes deprived urban environment that nonetheless holds some pleasant surprises, including a sunflower swimming pool around the back that is straight out of the Seventies.

However incongruous it might seem, the building was indeed built and designed together with local people and the city council. Users came up with ideas, ranging from the most trivial to the most metaphorical, that were included in the final project. They wanted an aquarium; they’ll find it behind the reception desk. They wanted a library; it’s there all right. But they also wanted a tree to make sure there was the symbol of their neighborhood, which is called l’Arbrisseau (‘arbre’ is French for tree). And so they got a tree, a 12-meter tree of life with a terrace nestling on each level and a panoramic viewpoint at its tip.

It was Lille City Council’s ambition to create something ‘beautiful’ and ‘high quality’ in the ‘suburbs’. L’Arbrisseau is in the south of Lille, an area that is undergoing radical redevelopment after years of social and economic decline. There is clear political ambition and varied urban landscape offers great potential. This is a tight-knit community: people born in L’Arbrisseau often spend their whole lives here. The challenge for this project was to embody this sense of renewal as well as a certain community spirit.

The building is arranged in a spiral around a central atrium. This means that it faces no particular direction but instead speaks to everyone equally. The plain untreated aluminium cladding of the façade underscores this desire to standardize the sides of the building and adds to its magnetism; the building catches the light and focuses the sun’s rays to form an attractive, shimmering whole. The project’s distinctive characteristic is that it is open to people of all ages. The tiny tots are on the ground floor, with a mother and child care centre, and a space to receive several groups of 0-4 year olds. Small and slightly older children are accommodated on the first floor, where there is an infant day centre (3-6), a ‘little wings’ area and activity rooms for 6-12 year olds as well as a reading corner.

The second floor is the domain of the older generations. There is a multi-purpose hall (intended for weddings and other private and public celebrations) as well as an area used especially for adult integration courses such as cookery and computing. The third floor contains administrative offices and a four-room, on-site staff flat that includes a south-facing terrace. The building’s layout allows each age group to relate directly to the one below it and the one above. This is what makes it unique. The mother and child care centre is linked to the first-floor centre for 4-12 year olds by a split-level garden. The tiny tots have direct access to the garden.

The first floor in turn connects with the teenage and adult floor via the double-story library. It also enjoys a terrace overhanging the garden.

The teenage and adult floor offers a variety of activities ranging from the multi-purpose hall for concerts or weddings to cookery and sewing workshops. A terrace acts as a continuation of the hall and looks out over the grounds to the north. This floor communicates with the top story of the building.

The aim of superimposing the various schemes was to free up the greatest possible space for a garden around the bottom of the building. Stretching the building vertically increases its visibility and its prestige. All of the different schemes are united around a common atrium. A concrete tower houses the facilities, staircases and lifts, as well as supporting the building. The design of this tower articulates the structural forces acting upon it and the toothing of the girders holding up the floors on either side. The solid, mineral mass and its extruded appearance also bring to mind the region’s characteristic underground chalk quarries (there is one behind the building).

The inside staircase echoes the cut-out façade of the building, allowing the light captured by the terraces filter through the tower like tree branches to produce complex and changing patterns of shadows in the atrium. The spiral staircase that curls around the outside of the building has a landing – or terrace – on every level, each connected to the next by stairs. Users can get to their activities from outside and also climb up onto the roof of the structure. Here there is a panoramic viewpoint overlooking the L’Arbrisseau neighborhood with the belfry of Lille City Hall in the distance. This reintegrates the L’Arbrisseau area into the fabric of the city of Lille as well as strengthening its local roots. 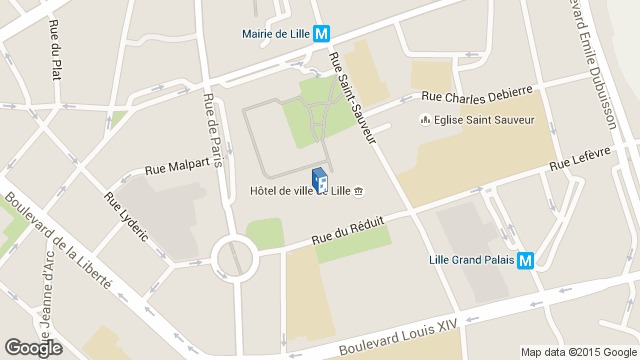