Save
The Evolution of the Japanese Tea House
Share
Or
Copy

Tea ceremonies have evolved a great deal since they first got their start in the ninth century, and as the ceremonies have grown and shifted in purpose, so have the tea houses that hold them.

Initially tea was seen as a medicine used to cultivate the mind, body and spirit; tea was seen as good for monks because it helped them to stay awake for long periods of meditation. For this reason, the military class sponsored the construction of large zen temples for monks to drink tea in. As tea began to grow in popularity beyond the temple, tea ceremonies became a source of entertainment for members of the upper class who could afford to gamble, read poetry and attend tea parties in extravagant pavilions. More information after the break.

It was not until Shukō that modern ideas behind tea ceremonies began to take root. In an attempt to escape from the material strains of daily life, Shukō removed tea parties from the formal setting and instead held the ceremonies in simple grass-thatched huts, like the Tai-an Teahouse. His goal in doing this was to transcend the complex distractions of the world and find enlightenment in everyday life.

Today, Shukō’s ideas of simplicity in tea ceremonies remain. Instead of signifying the search for enlightenment, however, the simplicity of modern teahouses is meant to emphasize the importance of breaking down boundaries that exist among people, objects and ideas. Architects strive to maintain the simplistic beauty of traditional tea houses, while also pushing modern interpretations of what a tea house can be.

The Fuan Teahouse, by Kengo Kuma, for example, is made up of a helium balloon draped with an ultra-light material called super organza. The fabric works with the pressure of the helium to create a floating structure without the use of walls or pillars. This absence of crucial building materials points to the simplicity of the structure and makes for the ultimate space of virtual reality.

In their design for the Hat Tea House, located in the Czech Republic, A1Architects used aged, natural materials to emphasize the traditional importance of connecting with nature. The circular skylight at the top of the roof, folding walls and sliding screens not only provide a beautiful view of the garden outside, but also allow for a more direct tie between the visitor and the natural world.

Taking the idea of tea houses designed to mesh with their natural environment to a whole new level, Terunobu Fujimori created the Takasugi-an, which translates to “a tea house too high.” He built the compact teahouse to appear as though it was resting between two chestnut trees, and although the only way to reach the tea house is via ladder, the view from the top gives visitors a perfect view of Chino, Japan. Instead of displaying the picture scrolls of traditional tea houses that indicated the time of year, Fujimori used the building’s windows to achieve the same effect while also allowing visitors to observe the profound changes that were happening in the world around them.

Although tea houses have come a long way since they first came into existence in the ninth century, modern tea houses still have strong roots in the traditional purposes of tea ceremonies. Tea house architects have to take into account how such structures have evolved over time and how they can continue to be adapted to fit the always-changing needs of modern society. 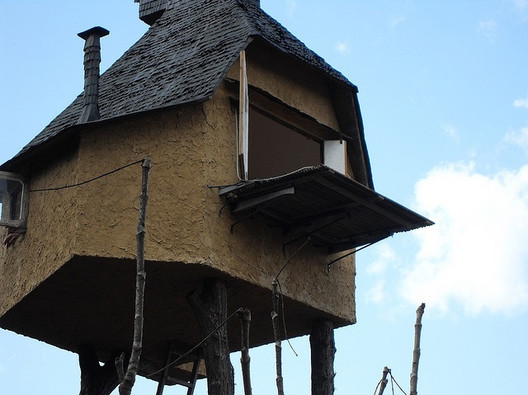