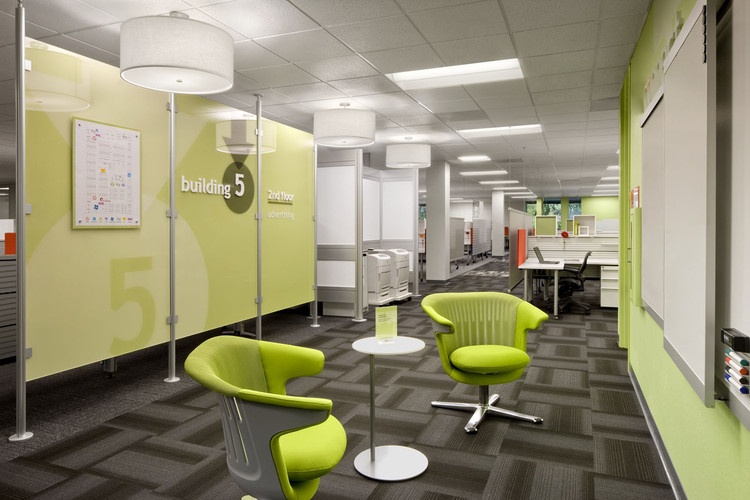 The design process began with a tour of a variety of technology companies to identify best practices. In addition, a company-wide survey asked more than 5,000 employees in eBay’s San Jose and Austin, Texas, campuses about their current work environment. The need most often identified was for smaller and more informal places to meet that didn’t require reservations, as well as for better communications technology.

The design team created a pilot space and developed mock-up rooms with furniture from seven manufacturers to test program concepts. Knoll was selected as furniture manufacture partner, but the spaces rely on furniture from a variety of other manufacturers as well. Space planning sessions with business unit teams further refined programming needs.

The new 6' x 7' bench-style workstations cost less than their predecessors and comply with eBay’s new standards for renewable and recyclable material content. The workstations are lower in height, improving access to views as well as natural light, which brings down the energy costs of artificial lighting. In addition, the new layout increases density per employee, saving on real estate costs. The modular system reduces the amount of warehouse space required, because the kits of parts is flexible enough to meet the needs of all business units. Existing workstation seats were all reused, supplemented by new office support elements.

Screens at the end of major walkways provide privacy for seated workers without blocking views, enabling people to see the whole floor and look outside. These screens also support storage, branding, whiteboards, tack boards, and a printer station. Departments engaged in sensitive work, such as human resources, are semi-enclosed and feature a white noise system around the perimeter of workstations to provide acoustic privacy.

In total, seven new collaborative venues were created. “Think” rooms support concentrated individual work and private phone conversations. “Focus” rooms have two chairs for one-to-one collaboration. “Keep and Meet” areas facilitate small team meetings with whiteboards and a common tabletop that rests on file storage that the teams can use for the length of their project. “Connect” areas consist of a few chairs with marker boards. “Project Lounges,” defined by Steelcase’s Post and Beam system and equipped with flexible lounge furniture, are areas that teams can occupy for the duration of a specific project. “Project Work” areas resemble project lounges but are furnished with mobile tables and chairs for easy reconfiguration. “Huddle” areas consist of Vitra’s Alcove Highback sofas facing each other, facilitating impromptu semi-private conversations.

The new workspace has been implemented in eBay’s San Jose and Austin campuses and is currently being rolled out in its workplaces across the United States. The project has resulted in an average 30% increase of workstation density, with an average of one new collaborative venue for every 18 workstations.

The workspace also better supports alternative officing strategies. In eBay’s existing workplace, visitors and hoteling employees had to work out of a dedicated facility on campus. In the new workplace, “visit stations” on each floor allow visitors to sit with their own teams for the duration of their stay.

Post-pilot surveys were conducted three months and six months after implementation of the new initiative to gain feedback from employees.