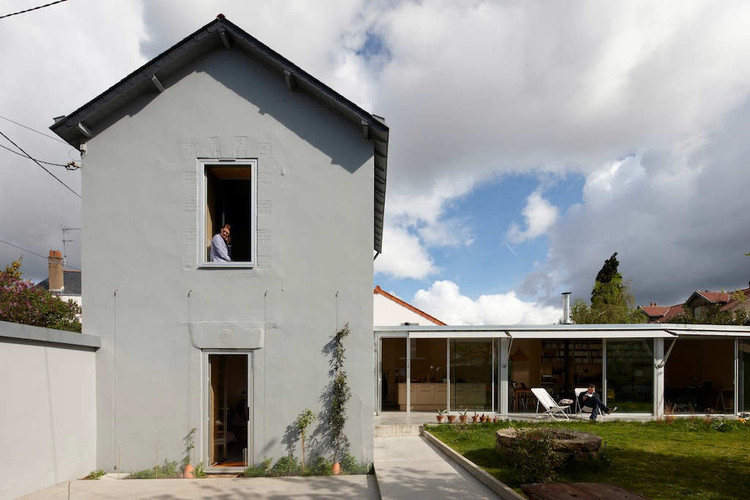 Text description provided by the architects. The site, located west of the city center in a former kitchen gardens area, was occupied by a small house built at the beginning of the century along the street, and by scattered shacks along the perimeter walls. These walls, two meters high, create an enclosure that protects the site from any outside views.

Our project creates an inside space within this garden, and therefore frees the house from any extra protecting devices.

The existing building and its extension, built along the party wall, are assembled to form an L-shape. At the center sit the common spaces, and clustered around them the private cells for all the family members : children, guests and few facilities along the street, and an isolated room and its bathroom at the other end of the garden in enfilade with the space of the living room.

The extension, orientated full south and extending to the garden through a concrete terrace, connects itself to an angle of the existing house and widens at its center to create a larger inner space.

Its facade is made of full height window frames that slide on three rails, allowing wide openings on the garden. Perforated sunscreens protect it from the sun and regulates the inner brightness.

The existing building offers a room per floor, linked by a staircase along the north facade. The window frames, flush with the outer face of the stone walls, create large alcoves lined in pine plywood.

Structure, waterproof membrane, façade elements have been chosen among the cheapest, in order to allow a relative luxury in the choice of finishings and equipments (plywood linings, kitchen and bathroom equipments, motorized sunscreens…).

The project economic strategy is thus definitely pragmatic and anti-pauperist, in order to create a domestic atmosphere even if slightly rough.

The extension structure is a post and beam metallic system, structurally independent from the existing walls, that support steel roofing modules and high density insulation panels, onto which is fixed a single ply waterproofing membrane.

The inner face of the party walls is lined in birch plywood, and unfold in all the rooms of the extension. This material is also used for the kitchen, and built-in bookcases and dressings.

At the back of the garden, the bathtub hut is covered by a black bitumen membrane. Its wide window is operated by gas jacks, that allow a complete opening, and transforms this small room in a resting place of pleasure. 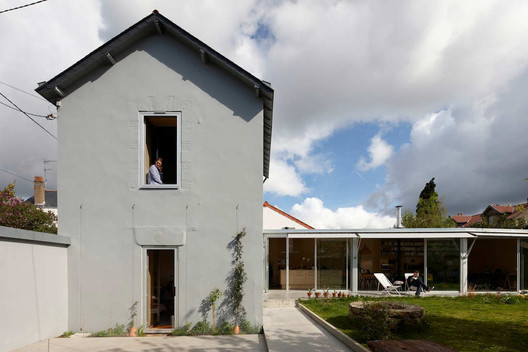