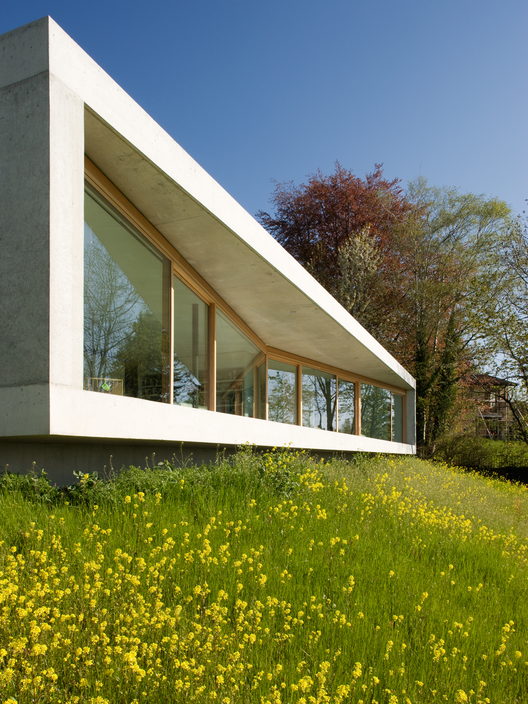 Text description provided by the architects. The project is articulated basing on two really simple spatial typologies. The first one, a compacted and pure single-storied level with huge window panels that open to the Alps, framing the beautiful view. The glazing surfaces on the entire level structure the façade in a generous way. The panoramic window panels fold inside, providing a special expression to the ensemble, while forming the terrace-covered area.

The difference of enclosure between North and South façades is two faces: “behind” the street and “on the front” The Alps as a visual limit. The “courtyard” typology is composed of an open terrace bordering on one side of the dwelling, a vertical wooden enclosure and by a “green wall”, which at the same time separates the dwelling from the street.

The garage, which protects the dwelling from the winds crossing the “Jura” from the East, permits a prolonged use of the terrace during the year. The dwelling is buried on its North side down the steep ground. The volume of the lower ground floor retracts from the façade line in the first floor, which produces a floating effect over the natural prairie.

The interior is arranged in 4 individual rooms, including wet and comunal areas, which are defined by the concept of open space. Both the garden and interior rooms, with their glazing façades, open onto the valley.