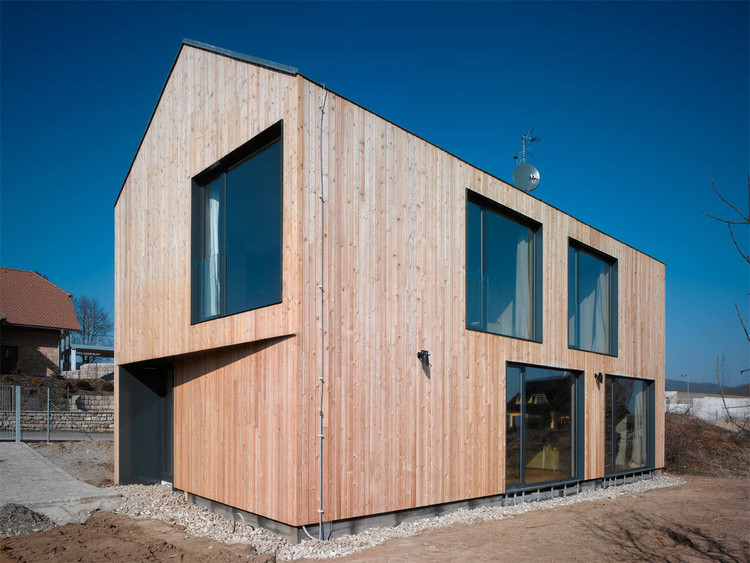 Text description provided by the architects. The goal of the design was a house that would, in its size, level of comfort and architectonic conception correspond to the modest needs of a young family.

The house is made of wood, with the basic load-bearing structure supplemented and further developed by the integrated interior. This approach allowed for the maximal use of space even in relatively small rooms. At the basis is a transparent, logical layout, with a sufficiency of storage areas in its contemporarily economical spatial concept.

The ground floor is dominated by the main living room, with a kitchen counter separated from the entrance section of the house with the transverse mass of the staircase. The upper floor (really an attic) is, contrastingly, divided into smaller sections: three separate bedrooms and a bath. To the side, a service corridor fulfils the secondary function of a wardrobe. In addition to the main bedroom, with its convenience further increased by its own direct access to the bath, all other rooms in the attic are covered by a flat ceiling creating a small usable attic above them.

The extremely simple and formally “traditionalist” appearance of the house’s mass is the result of the somewhat strict local building regulations regarding the shape and pitch of the roof, the height (number of floors) of construction, and distance from the edges of the plot.

The mass of the house is articulated solely through the repeated module of fenestration. The transition of the roof to the exterior envelope is resolved, both on the gable and along the eaves, without the slightest overhang: rain-gutters and drainpipes are integrated into the wall composition. In both gables, the facade is broken into walls running at a slant – on the ground floor, it forms a covered porch at the entrance, in the opposite gable, a covered loggia on the upper floor.

In its effect, the resulting appearance of the house is minimal, even ascetic, grounded merely in the refinement of the chosen natural materials, the composition of windows, the mastery of proportional relations and purity of detail. Great emphasis was placed on the chosen composition of the facade reflecting the logic of the interior arrangements. In this way, the house openly admits its simplicity. 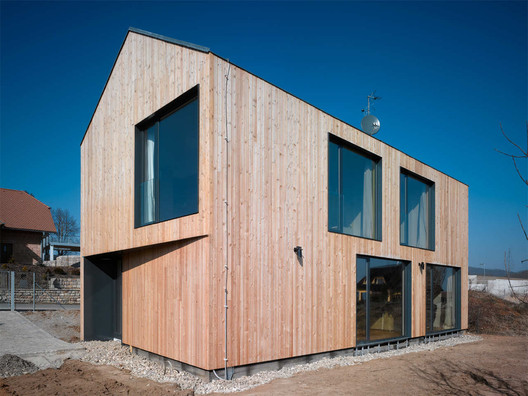