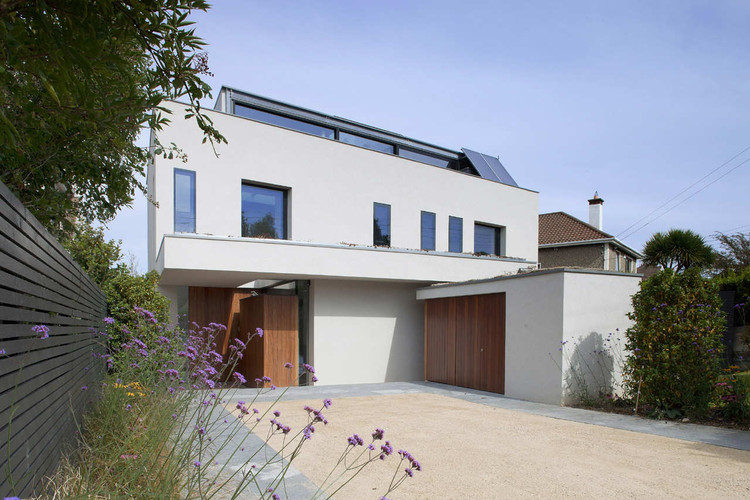 Text description provided by the architects. Constructed between 2009 and 2010.The building is a 3670 square foot 3 storey replacement dwelling set into the hill side in a low density suburban neighbourhood in Dublin. Segregation between the private and the public realms inform the spatial hierarchy which is the guiding principal to establishing an order for the building. The house has been deigned to contribute to perceived and passive surveillance and is informed by and responds to its context. The building is an investigation of the diagonal relationship of spaces informed by the geometry and aspect of the site and its contribution, by layering of space, to security in the public realm. A truly urban agenda.

The form of the house is derived from the site geometry and context. It is placed on a seventy by fity six foot stone plate set below existing ground level. This forms the ground floor finish and external surface to the court yards , A first floor box spans from east to west and sits over a plate which is the ground floor roof set in a diagonal relationship. The box is permeated by structure and two voids which allow light penetrate deep into the plan. The attic is set back from the façade to reflect the elevation treatment of neighboring buildings, all be it in a modern idiom. The ground floor enclosure extends beyond the building lines to the rear and to the front to create a private secure domain on the southern street side of the building on an otherwise under-utilized piece of suburban ground. Passive surveillance is increased by introducing another space between the street and this private domain screened so as to give glimpses of the interior and private external spaces from without; this indicates to the stranger that there is a possibility of being watched while allowing sufficient view to the occupant from the interior to give a sense of security.

Approach from the street is by way of a hard landscaped court and down steps to a covered space which is enclosed on two sides by timber screens and provided with a roof void. The timber paneling partially opens to allow access to a three storey void forming a lobby which makes a physical connection between spaces at all levels. From there one passes through the ordering wall which runs from the front to the back of the building provided with hinged screens to allow access to storage and utility elements. The internal arrangement of the ground floor is identified as complete open space which can be adapted by sliding screens to make three separate spaces allowing the house to function as required by the occupancy. The sliding screens are stored in a central core element which contains vertical routes for services and a fire place. This element orders the adjoining spaces, runs from ground to roof level and is bounded by a 3 storey light void containing stairs.

The first floor of the building is segregated into separate cells giving tranquil Northern light and views to Dublin Bay while presenting a more formal front to the building. The opening and closing of screens again provides alternative levels of segregation. This coupled with the second stair case would allow a separate apartment with direct access from the exterior.

The second floor opens up again to enable it function as a master suite, or separate apartment. Sliding screens are concealed in storage elements strategically placed to inform the spatial arrangement,. With screens in the open position this level has a direct spatial link across the stair void allowing views to all levels of the building. Access is provided to a roof terrace at the front and rear of the building.

In situ concrete forms the floors and enclosing elements which contain reinforced structural columns and beams. This is wrapped externally with a proprietary insulation and rendering system. Further enclosure is provided by high performance thermal and solar reflecting glazing in aluminium frames with open and close to make a direct connection between the internal and external spaces. Roofs are sedum. Internal spaces and the entrance area are defined by the placement of joinery. All spaces are provided with under floor heating, Solar collectors at roof level provide hot water. A heat exchange system is used to provide fresh air to the interior.

The client approached the architects with a brief to provide spacious accommodation for a growing family.The design brief was to subvert the existing typically suburban spatial condition, to provide for a building of architectural quality informed by its context and provide flexible accommodation for future needs. The design intent was to accommodate best practice in lifetime design to promote physical, economic and social sustainability in a resilient built form with a robust spatial hierarchy.