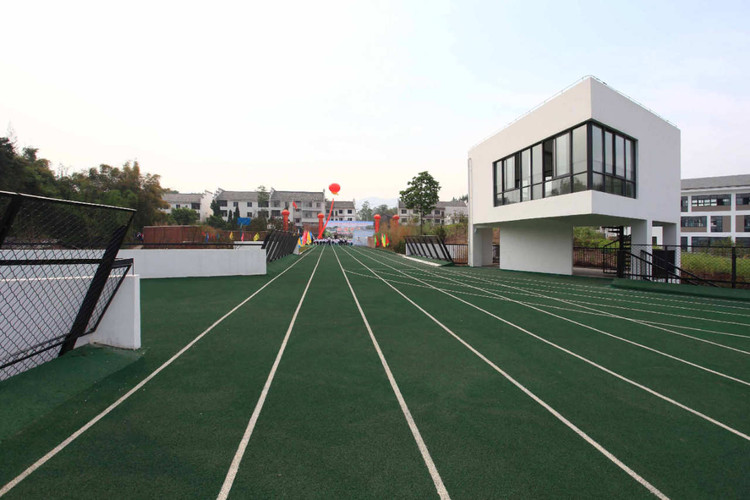 Text description provided by the architects. In January 2010, the China-US Center for Sustainable Development approached TEKTAO to lead the design and construction coordination of a new sustainable school in Liangping County to replace one damaged in the 2008 earthquake. The goals outlined from the onset of the project were to build a safe, sustainable, scalable, and cost-effective school. The school's brief specified 560 students (12 classes) and 5,000 m² of program with a 15 million RMB budget that was donated in part from the Liangping government and in part by charitable organizations. The site chosen was a beautiful plot of terraced agriculture in the rural Jindai County, just opposite the ancient Shuang Gui Temple. After a three month design phase in collaboration with American green design experts, followed by a six week construction document period, the school was under construction for 10 months and has been completed as of April 2011. During the week directly preceding the opening ceremony, TEKTAO lead a workshop along with Tongji University involving the Jindai school students and faculty, along with the local community, to facilitate the transition of the school’s ecological and social design ideas into real-world practices.

In this project, our aim was to create an exemplary school that respects and interacts with nature, culture, and community through comprehensive yet cost-efficient sustainable methods that are both vernacular and replicable. We achieve this in the form of an educational 'playground' with integrated communal program.

The main problem we identified was resolving the programmatic requirement of a running track while minimizing disturbance to a topographically intense site. Our design solution places the track at an optimum height that combines efficient grading with minimal support structure to create an activity platform which transitions from floor to rooftop and becomes a protective barrier for 3,000 m² in the vegetated heart of the site. By redirecting seemingly conflicting elements, the program that most threatens the site becomes its guardian. The building layout, which organizes and distributes program around the center, maximizes the students' interaction with their environment while structurally supporting the track. The newly defined 'skytrack' is a response of compounded program: combining the function of a running track, playground, hallway, viewing deck, and event stage in a geometry that embraces the site and emphasizes views to the temple. The entrance is combined with a public community center as an addition to the conventional school program in order to promote interaction with the villagers.

Our sustainable planning focuses on low-cost, high impact conservation, recycling, and comfort strategies tailored to Liangping's humid subtropical climate.  The terraced topography naturally lends itself to constructed wetlands; the site is adapted to treat both wastewater and rainwater, creating a low-maintenance, closed-loop organic infrastructure that treats 4,800 gallons of water every day. The rainwater that falls on the buildings and the track is collected in an adjacent wetland pond. When it rains, this wetland cleans the rainwater which then cascades down several ponds to become a landscape feature that reaches all the way to the school's entrance. In addition, dual-flush toilets help regulate water use.

Buildings are optimally oriented to capture light and prevailing winds based on analysis of the local sun path and wind rose. Solar ray studies were performed using Ecotect to determine the placement of light shelves and ceiling pitches inside the classrooms. LED lighting is used throughout the school to lower electricity usage and costs.

A passive HVAC system uses stable ground temperatures to condition the classroom buildings. The system is composed of several tubes dug 4-5 meters into the earth that are connected to the duct system in the ceiling. Fans are used to pump out and deliver air from the tubes into the classrooms to increase interior comfort and fresh air supply, thereby improving the overall air quality inside the classrooms.

Revived agriculture fields in the landscape, including a crop roof on top of the kitchen, feature endemic crop species that provide fresh ingredients (cabbage, bak choi, corn, rapeseed, and chives) for the cafeteria as well as dedicated areas for outdoor farming classrooms.

A range of reclaimed, regional, and renewable materials are used throughout: Foam insulation panels are salvaged from defunct earthquake shelters in Beichuan and incorporated into the classroom walls. Bricks and floor tiles from a demolished on-site building are reused to create the landscape ponds. Bamboo, which grows abundantly in the region, is used extensively in the exterior of classroom stairwells and on the school gate. The community center facade is composed of local stone.

The New Jindai School is deeply rooted in the surrounding context. The relationship between building and nature echoes the physical characteristics of Chongqing- known as the "mountain city"- where peaks readily invade urban fabric. Our design provides the adjacent temple with a ubiquitous viewing platform that visually integrates it throughout the campus. The structure is engineered to meet the strictest seismic codes. 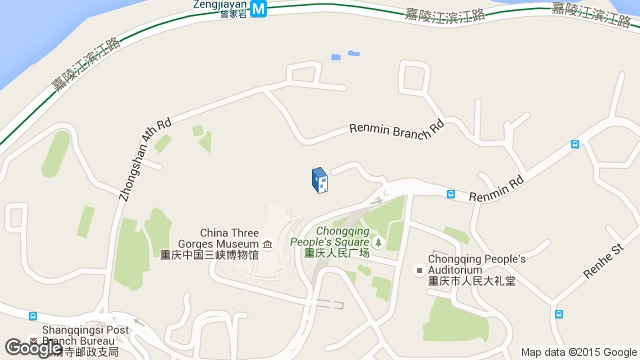