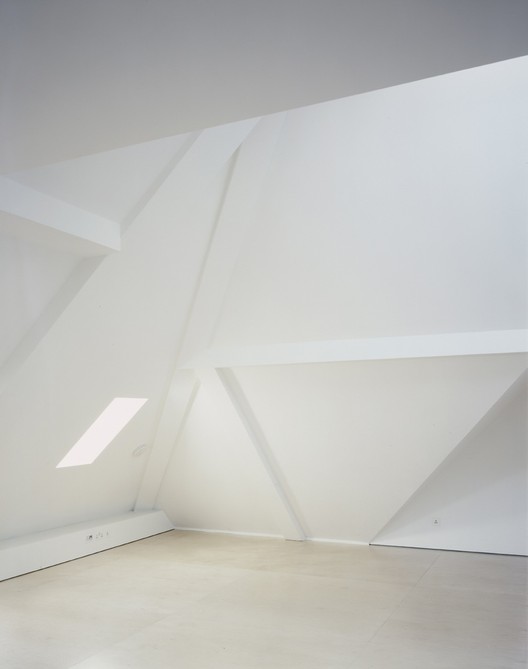 Text description provided by the architects. Two typical 1940’s semis in a north London suburb have been restructured to create a 7,500 sqf house for an extended family of eleven people. The practice of combining dwellings in this fashion is commonplace in some communities in the UK, although largely on an ad hoc basis and seldom from an architectural standpoint.

The house is shared by two brothers, their young families and their grandparents. Jonathan Woolf architects has been interested for some time in the way that UK construction methods rely on materials that are becoming thinner and thinner whilst at the same time striving to retain their surface material qualities. At the same time they have been studying paint as a material in and of itself. This is not a new phenomenon. The Georgians used paint meticulously to define a range of atmospheres that united several different materials within an ‘over-all’ (or ‘all over’) finish. The 1940’s semi is the perfect foil for these pre-occupations.

In this house almost all of the interior surfaces, walls, ceiling, floors and joinery are either painted or laminated to match paint. This lends the conventional shaped volumes an abstract character. The exterior of the old building has been over-clad with insulation, the rear and side finished with a layer of render, and the façade is faced with brick slips, presenting a clearly defined face towards the street, a look which is emphasized by the original window openings, which are retained to maintain the ordinary everyday feel of the traditional suburban semi. Along the sides and to the rear of the building, however, the openings become more expansive.

The new building works within the footprint of the existing properties, both of which had been extended previously on one level at the rear and sides of the plot. The new project extrudes these up to two floors together with an inhabited loft within a new roof shell. A steel frame has been inserted at ground level to achieve generous proportioned social spaces on the ground floor, which are of a scale in keeping with the size of this extended family unit, and include recreation and study spaces for the children, a large kitchen, eating and living area with large sliding windows opening onto the rear garden. The ground floor also houses accommodation for the grandparents in a position that reflects their place at the heart of the family unit.