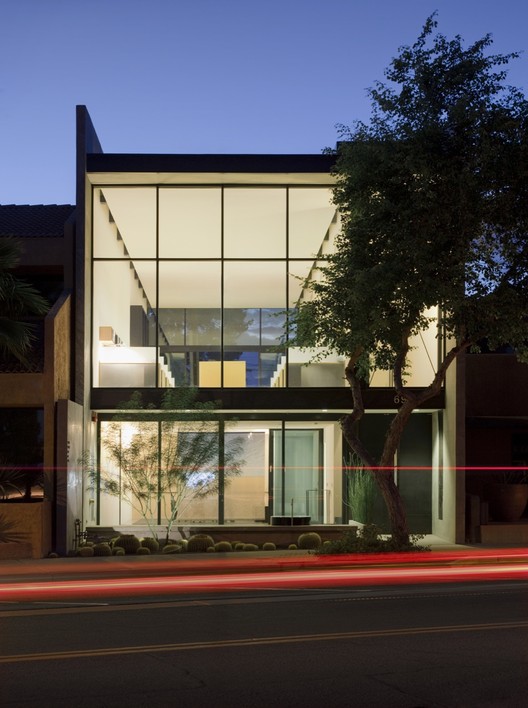 Text description provided by the architects. Black Rock Studio is a 3,150 sqf loft/studio which houses an entry courtyard, gallery, and meeting space on the ground floor with studio/work spaces on the second level. Black Rock Studio creates a dynamic relationship between building and the streetscape on the south and the canal on the north. The transparency of the north and south façade through large sliding glass doors create strong links between the studio and the canal to the public way. The loft/studio space transforms over the course of the day as the daylight moves and washes down the side walls of the space. Slot skylights run the length of the studio creating a floating ceiling effect and contributing to the balanced day-lighting.

Redevelopment of downtown urban cores is imperative to maintaining vibrant, livable cosmopolitan city centers. Urban infill projects such as Black Rock Studio provide continued revitalization to existing downtown neighborhoods. By injecting mixed use development into vacant urban spaces, we create new opportunity and negate the need for expanded development in outlying desert habitats. Black Rock Studio takes cues from the surrounding fabric and works within a context rather than creating an entirely alien architectural direction. At the same time it expresses a modern approach to the work environment with a forward-thinking direction for urban design. Black Rock Studio is developed on a 30 foot wide infill lot that fronts onto 5th Avenue in downtown Scottsdale. The long narrow site was designed with a landscaped entry courtyard along the street that acts as an outdoor room for the adjacent gallery space.

Large sliding glass doors open the courtyard to the ground level gallery space that will host changing exhibitions of local artists, architects, and photographers. Opening the sliding doors lets the gallery spill into the courtyard and it becomes the perfect space for intimate social gatherings. Proximity to the street connects the activities inside the space to pedestrian traffic along the street. This approach to a work environment promotes a greater connection between private business and the public realm. It is these connections that drive stronger communities.

The north and south facades of Black Rock Studio are composed largely of a glass wall system with exterior motorized sun shades. This allows for the working areas of the studio to fill with natural light and opens up views of the tree lined street to the south and the Arizona Canal to the north backed by Camelback Mountain. Views into and through the second story are afforded pedestrians who often pause along the elevated canal bank as they survey the interior spaces. Large sliding glass doors on the studio level allow the space to open up to the canal and take advantage of natural ventilation.

Black Rock Studio is an exercise in energy efficiency, material conservation and progressive aesthetics. During the design process, energy modeling was used to balance the goals of energy efficiency with the desired appeal of envelope transparency. Natural light through the windows is enough that electrical light is only necessary in the working spaces during non-daylight hours. The masonry walls were constructed from a recycled CMU block. By using the leftover block from other projects, the need for new material was minimized. All floors in the project are ground and polished concrete, therefore conserving the resources required to manufacture floor coverings. The concrete also provides thermal mass during colder months as the lower winter sun shines through the southern glass façade. The structural and architectural steel was manufactured using recycled content. Water efficient fixtures were installed throughout the project. Large operable doors in the storefront system can be opened to provide cross ventilation for interior spaces. By designing the rolling shades for the exterior of the building, heat gain through the glass expanses is minimized.

Black Rock Studio also opens up and engages the Arizona Canal through the transparent glass facade and large sliding glass doors. The Arizona Canal is a major linear thoroughfare for people walking, running and cycling in the area. Historically buildings in this part of downtown Scottsdale have turned their backs on the canal. The design of Black Rock Studio is part of an ongoing effort to rethink the way our urban buildings embrace the canals and recognize the great potential they provide as linear parks that weave through and connect our cities.

Black Rock Studio strives to act as a model for small infill development projects, which provides a creative work environment in a rich and diverse downtown environment. 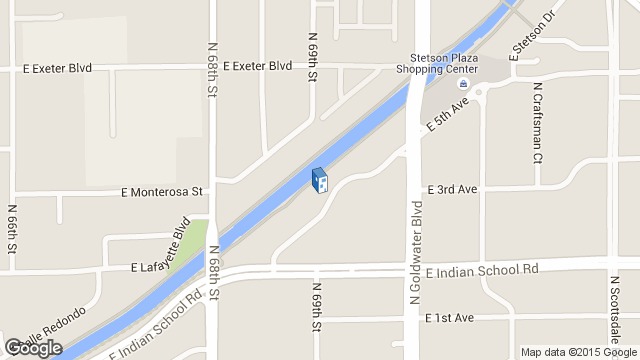