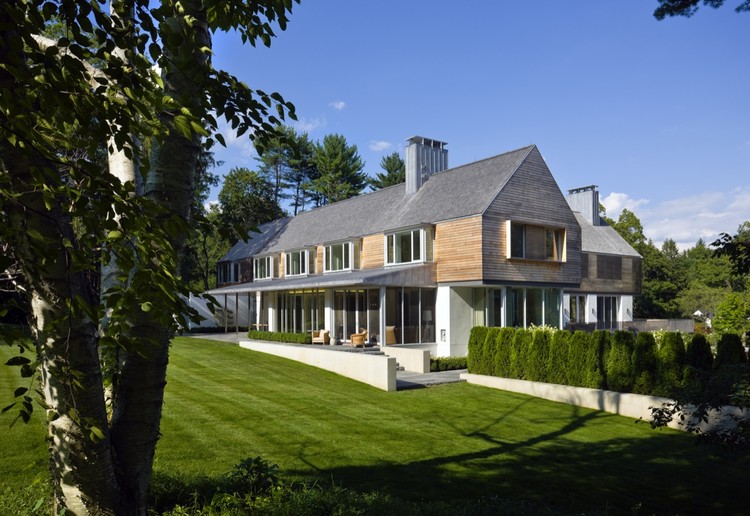 Text description provided by the architects. This project is conceived as a series of concrete retaining walls and escarpments that traverse and cascade down a steeply sloped site approximately 700 feet deep and 300 feet wide. In response to the steep + diagonal slope of the existing topography, the site / building strategy is to deploy a series of straight walls that act as “jetties” into the landscape and respond as a counter-force. As these walls begin to interact with the landscape they modulate and redistribute the sloping terrain into a series of terraces and gardens that spill and slide past one another.

Hovering above and anchored to these concrete site walls is the “House” proper. A simple, geometric house “primitive” that is conceived and constructed as a series of smooth extruded volumes or trapezoidal “boxes” of differing lengths. Symbolically and strategically, the first of these “boxes” presents a gable-front facade to the street and helps conceal the scale of the overall house beyond. Formally, it operates against the grain of the site and site walls. Its perceptual effect on the streetscape is strongly iconic, if not nostalgic (but hopefully not sentimental). The second container-box rotates 90 degrees and runs parallel to the street and site walls. It functions with the grain of the site walls as a kind of backdrop or screen to both the front and back yard activities and views of the property. It has little symbolic connotations; instead it operates as an abstraction, as a backdrop. The perpendicular orientation between the two “boxes” produces a powerful contrast and juxtaposition between representation and abstraction within the project.

The two cedar “House” boxes are next sliced by a set of three sectional cuts or negative spaces that contrast with these horizontal program containers and movements. Each cut operates against and in opposition to the programmed/inhabited spaces of the house by producing different environmental and atmospheric effects that allow the natural environment to cut through the house and produce spaces of repose and magic. The main sectional void is a water canal and waterfall that flows between two concrete site walls and then drops 12 feet to the basement space allowing reflective light, water, and sound to occupy the “center” of the house. This is the hearth, the most static and monumental space, but curiously, it is also the most dynamic and complex spatial-temporal knot (experience) in the house. It contains many reflective and transparent surfaces and sounds, but also the main stair that runs from the basement to the second floor and connects all the activities of the family.

The second sectional void is the “gable-front” façade itself. It is pulled away form the building proper to produce a light lantern. Highly-charged symbolically, the basic, iconic gable image of house is rendered playful and witty by moray effects from southern light during the day and artificial ambient light emanating out at night. Functionally, this interstitial space contains a covered exterior stairwell with access from the entry courtyard to the pool garden and lower-level play areas of various types. The third sectional void is a vertical slot that serves as the back stair that again runs from the basement to the second floor and separates the garage and guest suite from the children’s bedroom wing. The stair treads float between the walls of this four-foot slot and the horizontal wood lattice siding passes over the full floor to ceiling windows at each end producing an interstitial space with dynamic perceptual and light effects as if you are moving vertically inside the walls themselves. These three different sectional voids with their perceptual shifts and disorientations promote an entirely different spatial experience and aesthetic register to the more conventional and typical living spaces in the main wood boxes of the house. The registration of changing light, sound, and views literally cut through the “house” producing spaces of repose and changeability.

The “house-containers” themselves are skinned in a continuous 1”x1” alternating, horizontal cedar lattice that is intentionally pulled tight and taut over the “house-container” surfaces and contrast with the concrete + white stucco wall planes below. This second skin, like a membrane, passes right over windows and joints, with only the slightest registration of planar shifts from the surface changes behind. The resultant optical effect is one of precision and ambiguity from both the interior and exterior.