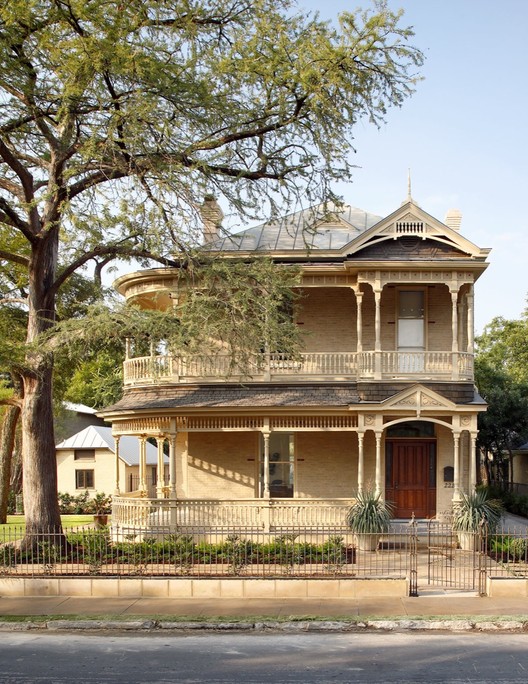 Text description provided by the architects. The Capps house was constructed in 1896, designed by German Architect Albert Beckman, one of several distinctive masonry homes in King William that Beckman was responsible for. Though continuously occupied since its construction, the property was suffering from a good deal of deferred maintenance when taken over by new owners Travis Capps and Lee Anthony. The wrap- around porch was rotted and sagging and the large lawn and riverfront were overgrown. Capps engaged Poteet Architects to tailor the house to his needs, without sacrificing the historic character its prominent site demanded. Work began first on the carriage house, which was to be the Owner’s home during the rehabilitation. The carriage house now contains a living space with a small –and very orange—kitchen on the lower level and bedroom and bath above. A small, highly stylish salon was installed in the brick pool house.

The exterior of the main house was approached as a full restoration, including a painstaking reconstruction of wrap around porch by General Contractor Rubiola Construction. At the rear of the house a 1970s era addition was removed and replaced with a new addition in the same footprint containing the kitchen on the first floor and a new master bath above.

The interior of the home was transformed to support the lifestyle of the new owners. Capps and Anthony are avid collectors of contemporary art and open their home for entertaining and large events on a regular basis. The interior design supports these passions by unifying the restored plaster walls in white and the floors in ebony. Museum quality lighting is installed throughout controlled by a “smart house” system which also operates the audio visual and security systems.

In the new kitchen and master closet and bath, the designers had the full opportunity to express the personality of the owners. The kitchen is sheathed in honed carrara marble, including open shelves which span the banks of windows. The storage on the kitchen is extended by a butler’s pantry which is tucked into the basement access of the old residence. Upstairs, the master closet and bath are merged into one flowing space dominated by the black closet island and the large glass-tiled steam shower in four colors of blue.

Bold color surprises are interjected at intervals to keep the white palette fresh: the robin’s egg blue in the foyer; the “Rorschach” damask wall paper in the downstairs powder room; the magenta “L” cabinetry in the upstairs office; and the “black on black” wallpaper in the guest bath, as well as the blue shower reflect the owners’ love of color and visual sense of humor.

In the same way that Capps and Anthony’s art collection is an international showcase, the design team found sources from all over the world to incorporate into the home’s design: the wallpaper is imported from Scotland; the decorative light fixtures are from Germany, Italy, and the Netherlands; fireplaces are from Australia; plumbing fixtures are from Germany and Spain; the kitchen marble is from Italy and the bath’s glass tile is imported from Canada.