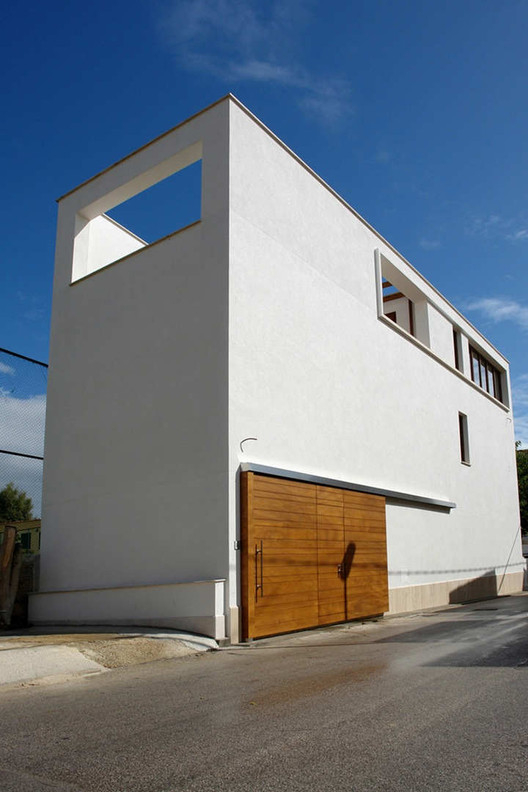 Text description provided by the architects. A small, two-story vacation house with an attached one-room apartment that comprises a third floor, located in the small fishing village of Selinunte in south western Sicily. It is in close proximity to the former train station and it represents a pragmatic example of our architectural style, which relies on understanding the context and urban fabric in which a building will be placed.

The construction is laid out over the entire lot, from which it takes its positioning, its characteristics and its odd, trapezoid shape which stretches out along a virtual axis going from North-West to South-East.

The house, which seems as though it were an extension of the lot itself, has its first floor, including the entrance, off of the street, while the second and third floors are closed off from it, giving it a decisively private feel where one can retire to an intimate and comfortable living space away from the heat and bustle that the summer brings.

The desire to keep visual contact with the two most important views, those of the sea to the South and the archaeological ruins to the North-West, is what determined the complete extroversion of the third floor apartment, which is characterized by the clean lines of the outlets that frame the landscape. It can be reached by a stairway whose shape and lighting work together to emphasize the upwards movement.

Casa Calcara can easily be considered compatible with the surrounding landscape, as both its physical characteristics (due to the adaptation of clean lines, a color palette that matches that of the local building tradition, and the lack of decorative frills) and the building techniques and materials used (wooden window and door frames, Li Vigni plaster, marble from the surrounding area, etc.) allow it to be included in the same stylistic vein as that of Sicilian architecture, which, in turn, falls into the larger branch of architecture known as "Critical Regionalism", defined by its desire to marry the aesthetics of Post-Rationalism (coming from an international background), with the most liberal interpretation of Mediterranean architecture.

In closing, the voluminous open spaces created by the internal double-height and external triple-height not only provide added spaciousness and accent lighting, but they also allow for a natural ventilation of the open spaces, reducing, with the help of specific materials and constructive techniques, the consumption of energy for Winter heating and Summer cooling.