Save
Designing Tomorrow: America’s World’s Fairs of the 1930s
Share
Or
Copy

Exploring modern design and a technological future, the 1930s World Fair’s held in Chicago, San Diego, Cleveland, Dallas, and New York featured architects and industrial designers such as Raymond Loewy, Norman Bel Geddes, Henry Dreyfuss, and Walter Dorwin Teague.  A modern, technological tomorrow unlike anything seen before, the World Fair’s presented visions of the future including designs for the cities and houses of tomorrow with a lifestyle of modern furnishings which were viewed by tens of million of visitors.

Designing Tomorrow: America’s World’s Fairs of the 1930s exhibition is currently on display at the National Building Museum in Washington DC thru July 10, 2011. Building models, architectural remnants, drawings, paintings, prints, furniture, along with period film footage are all included within the exhibit.

In the midst of the Great Depression, tens of millions of visitors flocked to world’s fairs where architects and industrial designers collaborated with businesses like General Motors and Westinghouse to present a golden future complete with highways, televisions, all-electric kitchens, and even robots. 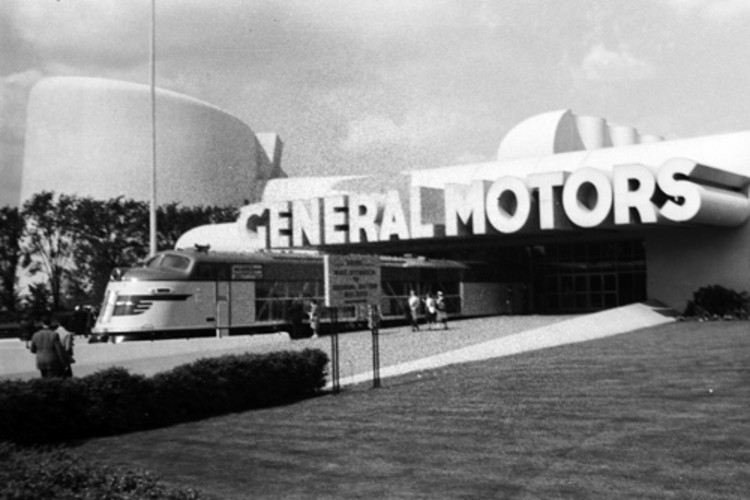 The National Building Museum’s new exhibition Designing Tomorrow: America’s World Fairs of the 1930s is the first-ever exhibition to consider the impact of all six American world fairs of the depression era on the popularization of modern design and the creation of a modern consumer culture.

The exhibition further explores how the 1930s world’s fairs were used by leading corporations and the federal government as laboratories for experimenting with innovative display and public relations techniques, and as grand platforms for the introduction of new products and ideas to the American public.

There visitors will discover promotional memorabilia for the fairs of the 1930s and be introduced to the industrial designers who helped shape the fair landscape. Visitors then move onto A Fair-going Nation where an oversized map of the U.S. shows the location of each of the 1930s fairs and wall displays showcase artifacts such as guidebooks, posters, and postcards from each of the fairs.

The next gallery, Building a Better Tomorrow, focuses on the architecture and modern design of the fairs which included streamlined buildings, innovative display techniques, modernist murals, colored neon, and more.

Travel and transportation pavilions and exhibits were some of the largest and most impressive at the fairs and are the focus of the next gallery Better Ways to Move. Visitors will view footage from the New York Fair’s Futurama display designed by Norman Bel Geddes for General Motors, which took fairgoers on a narrated trip across a 35,000-sqaure-foot model of an imagined metropolis, and its surrounding countryside, of 1960. At the fairs, millions of visitors walked through model homes replete with innovative floor plans and modern furnishings.

The Better Ways to Live gallery mimics this experience at the fairs with a space dedicated to innovative domestic architecture and furnishings from four model homes. Through original artifacts and interactive stations the Better Times gallery explores how fair exhibits translated the story of scientific advances in electronics and chemistry into a promise of better, more modern living to the public. The spread of home electrification in the 1930s meant that innovations displayed at the fairs—from television to all- electric kitchens—were within reach, or soon would be. The architectural and design legacies of the 1930s world’s fairs are visible in American building and consumer culture of the past 50 years. The final gallery, Legacies, reveals how the fairs foretold much of what would become modern post-war America—from the national highway system to glass- walled skyscrapers and the spread of suburbia. This gallery will also answer questions such as: What happened to the fair sites? And how are the fairs remembered?

As a companion to the exhibition, Designing Tomorrow, a collection of essays, will be published in September 2010. The collection celebrates the influence and impact of the world’s fairs of the 1930s and the complicated negotiations brokered between tradition and avant-garde design in the cutting-edge work that was presented. The book is edited by Robert W. Rydell, assistant professor at Montana State University, and Laura Burd Schiavo, curator of Designing Tomorrow and assistant professor at the George Washington University. The collection is published by Yale University Press.

In conjunction with the exhibition, the Museum is developing a variety of education programs intended to further examine the impact of world’s fairs on modern design. Lectures and panel discussions held throughout the run of the exhibition will focus on innovations in structural technologies at world’s fairs, world’s fairs in the 21st century, the democratization of “good design” in consumer products, and other topics. In addition, a film series highlighting the 1930s as a seminal decade in American documentary filmmaking will be held at the Museum, while another film series of modern Hollywood film fantasies will be screened in partnership with AFI Silver Theater in Silver Spring, Maryland. Visitors to the Museum can also take advantage of free, docent-led tours of the exhibition.