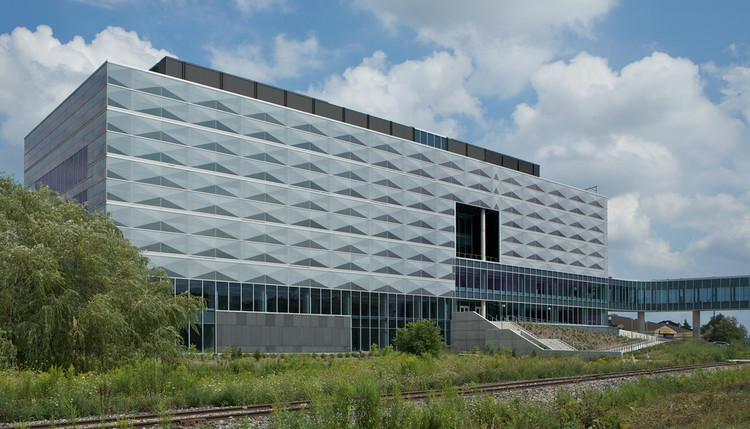 Text description provided by the architects. The University of Waterloo's Engineering Five building marks the first phase of a major expansion to the Faculty of Engineering and a dramatic new showcase for its innovative work. The six storey structure consolidates previously dispersed departments with four stories of departmental labs, classrooms and offices above a two storey Student Design Centre (SDC). The SDC is conceived as a "daylight factory" where instructional space and design studios overlook high concrete framed work bays and shops supporting the fabrication and display of student projects.

The building is clearly articulated as having two spatial systems whereby the main public routes and the SDC are highly transparent and read in contrast to a fritted glass facade whose volumetric illusion abstracts the scale and form of the departmental floors. A six storey atrium with a unique LED lit feature stair unites the various levels and ties into the social gathering spaces for each of the departments. A foil to the Eng 5's taught. prismatic shell, the curvilinear glazed bridge facilitates the movement of people, equipment and machinery over the campus ring road and a regional rail line.

The design for Engineering five presents a highly abstract composition where patterns of pedestrian movement and the principal public spaces are read in contrast to the seamless graphic illusion created by an innovative ceramic frit application. The Central Atrium and the stair within it are designed to encourage movement between floors and the interaction of the various departments. Clad in a perforated acoustic metal panel and ribbed with fissures of LED light, the stair simultaneously performs circulation, lighting and acoustic duties within the six storey space.

The building’s lower two floors are dominated by the student design centre – a suite of robustly structured, flexible spaces that offer infinite creative potential to student teams. Conditions of extreme transparency and overlook make the SDC the showcase of the building.

The University of Waterloo was substantially developed in the 1960s as a bucolic garden campus. Successive infill has clouded the original vision and until recently, the Engineering Faculty occupied a warren of congested spaces, at odds with the Faculty’s innovative programs. ENG 5 and its planned expansion mark the first realization of a strategic master-plan that commands a parcel of land to the east of the Campus ring road. Through its facade, its planning and its siting, ENG 5 defines a new era of expansion while uniting it with the existing campus.into a coherent public realm. ENG V and the space it shapes simultaneously define a new era of expansion and unite it to the existing campus.

Although, the client elected not to pursue LEED certification, the building is designed to achieve a high degree of sustainability. 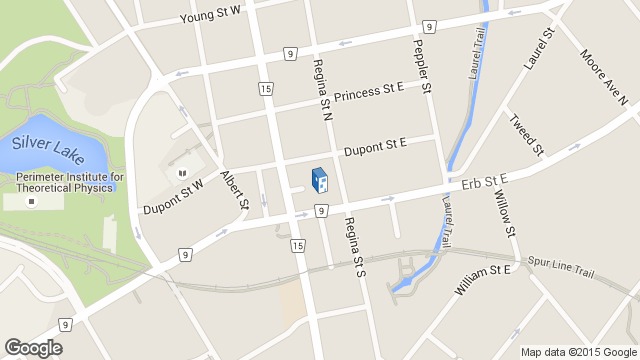