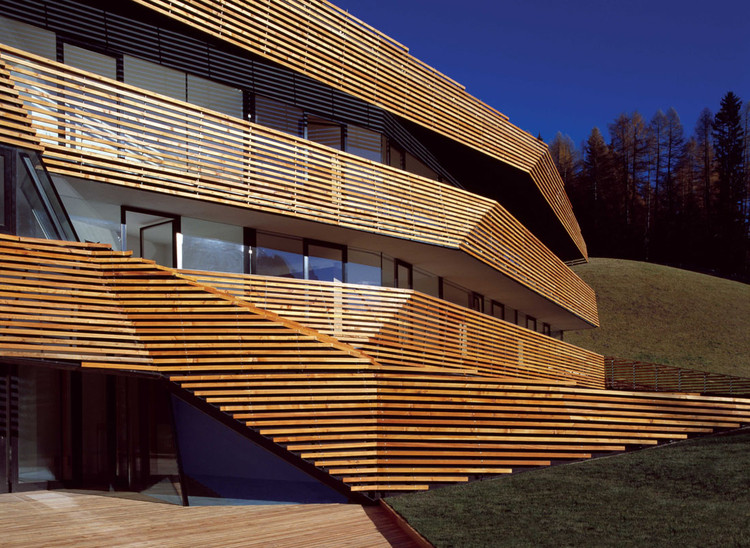 Text description provided by the architects. Located on a steep hillside in the Italian Dolomites this new-built hotel has been developed as the interweaving of the free-flowing topography- indexed and organized by series of timber strips- and the serial sequence of appartment units perpendicular to it.

Since the overall shape was developed from the local planning guidelines, the linear distribution of units and the views and sun directions, it is a resultant of the constant negotiations among all these parameters as well as a topological answer to the picturesque typologies frequently built in the area. From applying the logic of topographical mapping i.e. the indexing of horizontal sections as continuous lines, the volume is formed as a series of strata that as an artificial entity maintains a dialogue with its natural environment. In addition these horizontal sections operate as control lines, enabling the generation of curved hyperbolic-parabolic geometry.

The bands surround the volume at different scales, peeling off from it, flowing into the landscape and blurring the boundaries of the building.

The balconies become in-between zones that negotiate the internal rationale of the apartments -ruled by efficiency and the repetition of parts- with the exterior- as extension of the topography.

The building is an extension to an already existing Apart - Hotel. As the context was not considered worth to be continued, the old and the new part connect only at an underground level and through a mediating low and inconspicuous building volume at ground floor level. The main building volume distinguishes consciously from the existing part.

Programmatically the new volume is divided into two parts: the right side of the wing is a rigid addition of the axis of the guestrooms, all directed to the view and the sun, the left one together with the mediating building is occupied by the private house of the client.

The two parts are visually divided from each other through a building volume which reads as an artificial topography and is an extension of the existing natural landscape. Programmatically this volume gives privacy to each of the two different zones of the building, conceptually the natural landscape unfolds into an artificial one and connects into the façade of the building which reads a series of folded bands which run around the volume and connect in the different parts to the natural topography of the hillside.

The guestrooms are all developed as family appartments: they all provide space for a living and dining area which is divided by a piece of furniture from the sleeping area of the parents, the kids get their own small sleeping corner. Each room has a balcony directed to view and sun, the façade behind is fully glazed. The furniture repeats the material of the outside bands: local larch wood. A series of wooden sticks is brought into the interior: it unfolds from a bench into a shelf and into a sofa and connects visually to the outside bands of the balconies. Each floor is accentuated by a different colour scheme. 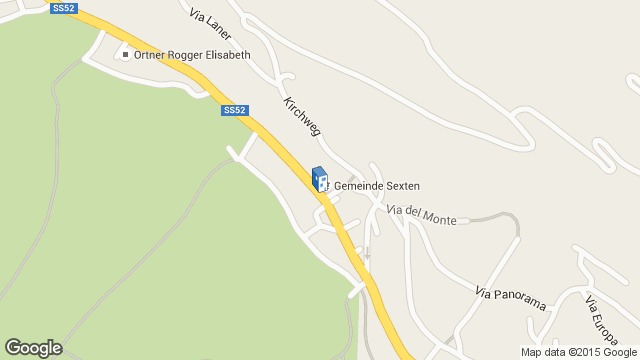 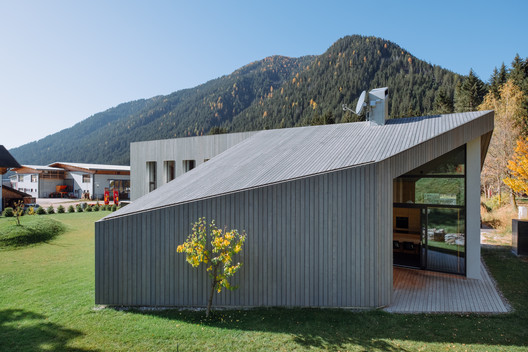 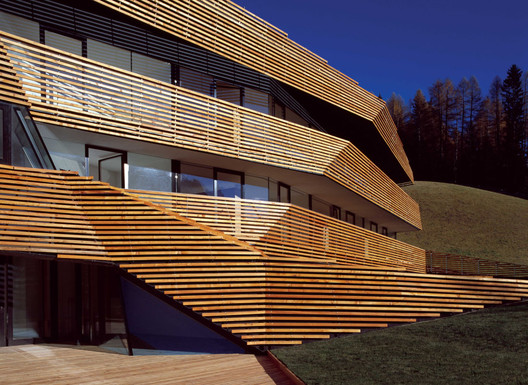