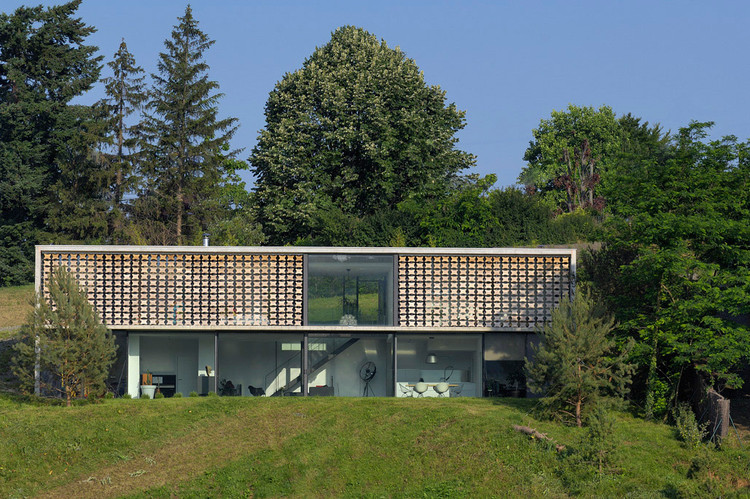 Text description provided by the architects. The house is located in a small village in the area of Lyon on a very steep slope and facing an open landscape. It is situated on the fringe of a natural reservation where no house can be built.

The building of the house was very complex for various reasons:

- it was very difficult to get the authorization to build contemporary architecture on that location.

- building was difficult also because there was no way to access the lower part of the building site so that it was necessary to find a compromise with the neighbour for him to allow the building of a path going along his own terrain.

- I made the external wood curtain myself which required more than 200 hours of work.

The house is a 23m x 7m parallelepiped, made of concrete, steel and glass, embedded in the slope of the terrain.

It is composed of two floors which both have direct access to the garden.

All the rooms are exposed to daylight. A large opening in the floor of the first storey enables daylight to reach the groundfloor.

The wood curtain is the specificity of the house. It is composed of shapes that have been named 'biscuits' by the first French magazine who published the house. I found the name was appropriate and I decided to keep it.

- it helps the house integrate in the landscape where local houses are built in beige stone. From a distance the curtain reminds, in a contemporary way, of the traditional assembly of stones.

- it also has a thermal role as it reduces the impact of the sun in the bedrooms in the morning. This is important as those rooms face the East and have windows covering the whole façade.

- it finally enables to visually insulate the bedrooms from the outside as by creating a mirror effect between the curtain and the window pane.

The bedrooms are upstairs and the 'day' rooms are downstairs. The groundfloor is lined with windows going from floor to ceiling in order to enjoy the landscape all day long.

In the living-room huge French windows (8m x 3m) open on the garden so that you have the feeling that the garden is part of the house; there is a sensation of continuity between inside and outside

Within the house there is also a sensation of uninterrupted continuity as the heaviest and most cumbersome elements (the fireplace and the stairway) are suspended over the floor.

The fireplace, both cumbersome and light, acts as a separation between the living-room and the music-room. It is made in steel and is partially filled with refractory concrete providing thermal inertia and heating comfort.

The suspended stairway was built without risers for maximum daylight to go through and not to block the view. 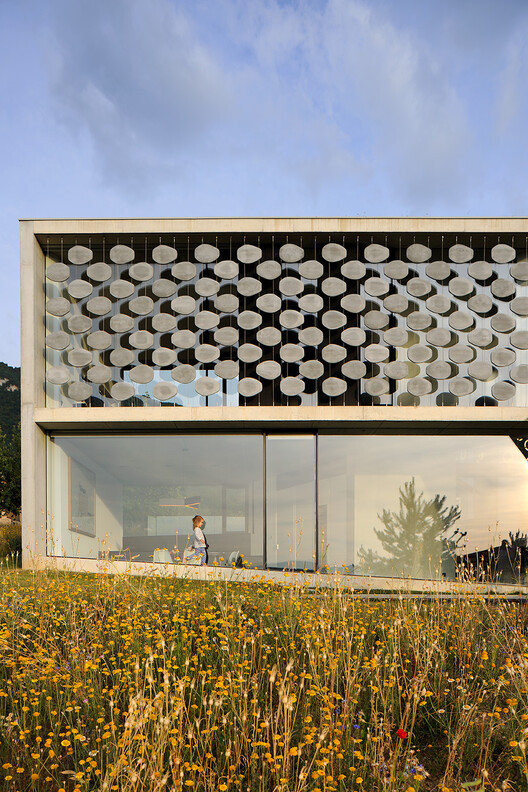