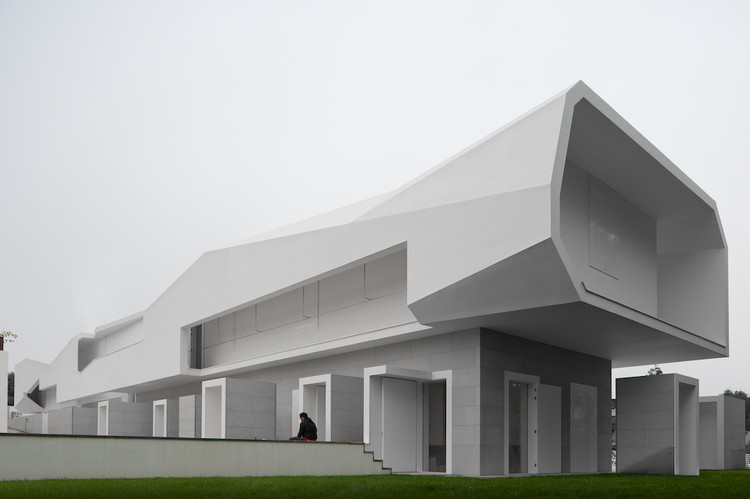 Text description provided by the architects. Designed and built by Alvaro Leite Siza Vieira, the Fez House is located in Porto, Portugal. This home and studio space, 'the work of my life' according to Siza, took 12 years to complete, assembling the site, designing the house, and then building it. The home's size is almost statuesque with its lines and angles.

To do architecture it’s necessary a client, a promoter. When I realized, in certain moment of my career that to continue my path I would need to occupy that role too, I didn’t hesitate.

I conciliated objectives, interests, goals, I pursued an ideal and I achieved a dream. I also had the need to be, in this work, supervisor, coordinator and project director, in an organization in direct administration. I started this work in 2004 and I finished it in early of 2005. The construction begins in February of 2006 and was concluded in July of 2010.

The project of personal house-atelier is the first where is present touching figures in their own atmosphere, exalting pieces, personalities that derive from history, versus the sensibility, recreating individually realities, with no intention previously defined. They appear in the middle of delivery to ones believe beyond what we need (specific program and functional), sublimation underlying to authentic communication of the creative process.

When the modern is old, a pass appears in the most eloquent and distant expression. The affirmation of a new Romantism, of a Classic Renaissance, came directly of the origins, with the interior load not less important.

The home like laboratory of ones dream that represent the drives, ideas, tensions and strength behind de matter.

The stories and its emotions that condense the symbolism that represent. The figures and humans relations. In this project, borned from free drawings of harlequin – laughing about the problems, the tensions, the conflicts, the mismatches, between other dramas that surround this activity – that transforms in a geometric abstraction, where there’s no place for frames or glasses, I rehearse the affirmation of a new Classicism.

Transitional spaces, the porticos, the lamps, the light, the doorknobs, the doors, the hand rails, even some paintings and the furniture was designed for me, but also other of XIX century (timeless pieces) that came from my family that fit the environment perfectly, beyond other elements, complement the creation of environments that exalt Mozart, Leonardo da Vinci, Miguel Angelo and surrounded by a lot of extraordinary Art works, that aren’t limited to the atmosphere of purely imaginary architectural.

The conclusion of this ideal was possible due to a personal characteristic of obstinated stubbornness and dissatisfaction non less expressive. It started 12 years ago, with an acquisition of a lot without access to the street and for that a lot more financially favourable.

In the next 6 years I tried to find a connection that would make this possible.

I was lucky that a promoter of one unoccupied lot was a direct cousin of my mother that finally would sell it to me. I was forced to buy another lot next to this one to make the business feasible, that I sold with a personal approved project. In this way, I capitalized, investing all the money in this business. During the necessary operation of regrouping of the lands, appears the project, result of one discourse of paradoxical intentions.

The volumes organized themselves by vertical and horizontal sections. One programme built by one atelier facing to the street, garages and service areas working with a hinge and finally the House related with the garden. One of underground storey corresponds to the foundations, another ground storey in granite, corresponding to the public and social areas, and even the top story.

If In one hand, the ground floor expressed them self of inside to outside, of the intimacy to the exterior in an explosive manifesting, creating the necessary openings, the porticos of transition and the respective skylights of natural light; for other hand, the upper storey implode.

The aggression of exterior create symbolic tensions, pressures that recognize themselves of outside to inside, reducing their volumetry, giving rise to one figurative image.

Through a geometric rigorous abstraction to make possible the constructive system, built by lozenges associated in different angles that confer higher tridimensionality, I found the proportion that I wanted, the horizontality I wished, the orientation predefined, the objectified and determined direction. The symbolism of the figure that sublime the oppression of one system. 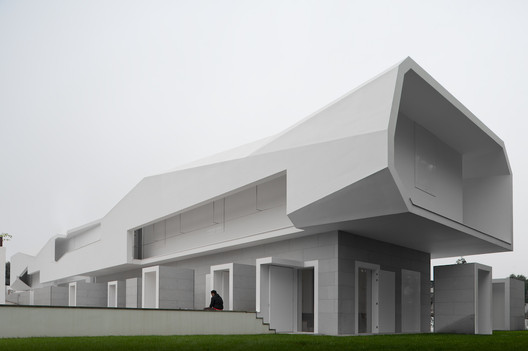