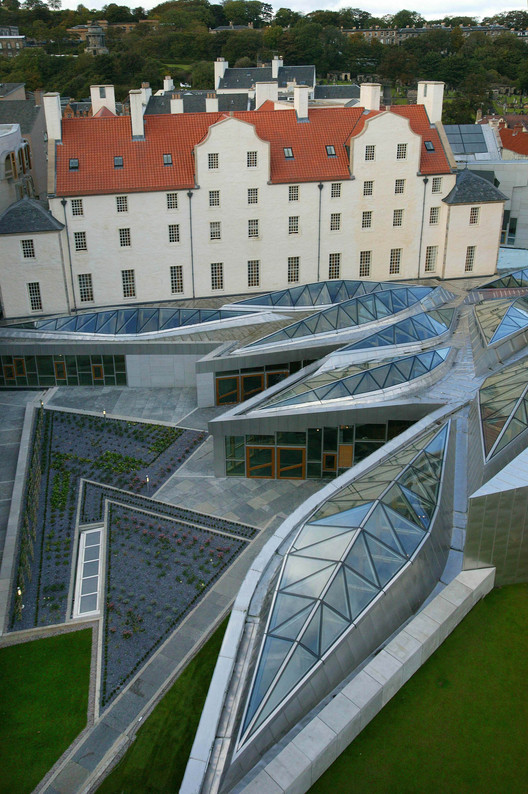 The desire for a Scottish parliamentary home emerged with the political resurgence of Scottish nationalism in the latter half of the twentieth century. Its mere existence was controversial, as it represented a move toward autonomous government within the United Kingdom that was not and is still not universally accepted. In 1997, a popular referendum approved the project, and a year later, a widely publicized competition was held for the job. The designs of five shortlisted architects were released to the public for their approval, and while a concept put forward by Rafael Viñoly actually won a greater share of the public support, the selection committee awarded the commission to the Spanish-Catalan architect Enric Miralles, whose design had finished in a close second.

Much of the appeal of Miralles’ proposal was his articulate incorporation of Scottish heritage into a radically adventurous design. Drawing inspiration from the Scottish landscape, he borrowed the forms of upturned boats from a nearby shoreline, as well as motifs from the flower paintings of Charles Rennie Mackintosh, Scotland’s architect-turned-national hero. [1] These became the basis for the massing of the building, as well as the form of the iconic canoe-shaped skylight apertures in the Garden Lobby. In addition, Miralles keenly invoked allusions to the Saltire, or the Scottish cross, in ceiling impressions and other details.

More than a single structure, the Parliament is actually an entire campus of interconnected spaces. The debating chamber—the heart of the complex—is physically separated from the other programmatic areas, which include an office building for the MSPs, a press tower, administrative areas, and a restaurant and dining area. Tying these separate buildings together is a spectacular, sky-lit ground floor that provides continuous circulation around the site.

As a work of architecture, the Parliament is an almost overwhelming sensory experience of complex shapes, materials, and structural devices. Every feature of the building is uniquely detailed, with certain themes and clear sightlines unifying the highly abstracted and seemingly random design. Soaring spaces are juxtaposed with intimate, human-sized niches that create an exciting and unpredictable maze of architectural stimuli.

There are simply no afterthoughts in the design, and the attention given to every surface, joint, and opening is remarkable, as one can tell from the inventive structures of the debating chamber ceiling or the custom-made furnishings built for nearly every room. This universal level of detail, while unfortunately the cause of high construction costs and many delays, serves to emphatically reject the establishment of spatial hierarchies; each room is as thoughtful, unique, and important as every other. The effect is striking, and the whimsical expressions of the architect achieve an impossibly difficult formal clarity amid dazzling complexity.

While the demanding architectural specifications had unfortunate scheduling and financial side effects, many of the other controversies around the construction were undeserved. An often quoted starting estimate of £40 million, used mainly by opponents of the project to disparage the £414 million final bill, was merely the estimate of a consultant for a siteless, shapeless office block of approximately the requested size. [2] The first estimate of the Miralles-designed building began at £109 million, and many of the further cost increases were the result of the ever-increasing spatial and programmatic demands of the clients. Requested office capacity more than doubled during the design phase of the project, and extravagant amenities, such as the multi-million pound media spaces, were added later as well. Unfortunately, little of this mattered in the ensuing public outcry that shrouded the building in disdain and made the Parliament into a symbol of government excess, mismanagement, and irresponsibility.

For some members of the media and the public, the unconventional and shocking design only made matters worse. Upon its opening, it was derided by some as an architectural travesty, eventually being ranked fourth on a poll of UK buildings the public most wanted to see demolished. [3] Interestingly, though perhaps not too surprisingly, the building’s reception in the architectural community was markedly different. Most critics instantly recognized the brilliance of the design and attempted to defend the groundbreaking project against the extreme costs and delays that threatened to overshadow it. This professional reception showed clearly in the series of major architectural awards that quickly came to the building, perhaps most notably the 2005 RIBA Stirling Prize.

Charles Jencks, then serving as a judge on the Stirling Prize committee, analyzed the project's site-sensitive design glowingly: "In the era of the iconic building, [the Scottish Parliament Building] creates an iconology of references to nature and the locale, using complex messages as a substitute for the one-liner. Instead of being a monumental building, as is the usual capital landmark, it nestles its way into the environment, an icon of organic resolution, of knitting together nature and culture into a complex union." [4]

The rift in perceptions between the architectural elite and the general public has somewhat narrowed over the years as it becomes easier to appreciate the building’s successes outside of the disastrous back story that dominated its early days. For Miralles, who tragically died of a brain tumor in 2000 without seeing its completion, the Parliament has emerged as his magnum opus. The whimsical and impulsive design remains uniquely unparalleled in the world today, and the building continues to exert tremendous influence onto the field of architecture.

[1] The Scottish Parliament. “About the Parliament Building.” Accessed 12 Sept. 2014 from http://www.scottish.parliament.uk/visitandlearn/9983.aspx.

[2] "The Holyrood Inquiry: A Report by the Rt. Hon. Lord Fraser of Carmyllie QC." Sept. 2004. Accessed 17 Sept. 2014 from http://www.scottish.parliament.uk/SPICeResources/HolyroodInquiry.pdf. 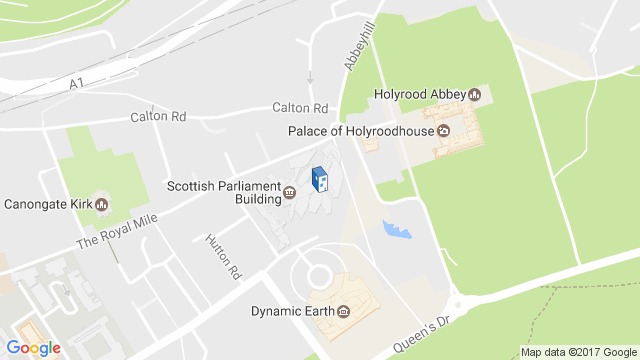