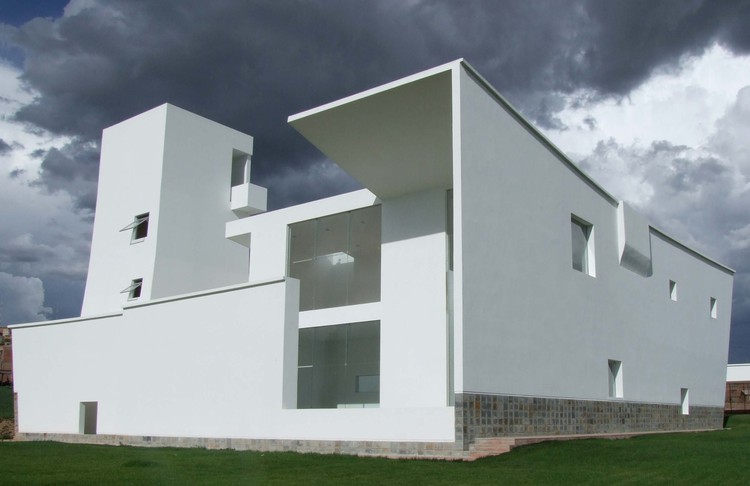 Text description provided by the architects. The Campus: The concept of a campus is not a paradigm with no historic root in the city of Sucre, being traditionally a university city, it always has prized to offer itself willingly, either in its public spaces or in its monumental buildings and urban collections, to the presence and activity of students of the entire country, a fact that grants Sucre much of its singularity: This is what's called genuis loci.

The surch for such spirit has been the fundamental directive that guided the design of the campus at a level of general planning, convinced that it couldn't be conceived as a collection of buildings dispersed on a green area, but emerge as a coherent unit and ordered following its own urbanistic guide lines. To embrace local architecture and its own relation with urban context, have been the strategies to capture the spirit of place. The green areas have been conceived as a park that is a part of the urban entwine of the campus. This is not simply the surrounding space of the buildings, but a system that admits, vehicular and pedestrian roads, rest spaces, building approximations, milestones and spaces of reunion.

Context: As we conceived the arquitecture of the buildings, we set the necessity that these buildings should invoke local architectural sensibilities as a strategy to obtain a collection of buildings that would be intimately entwined with its cultural habitat None the less, in order to achieve a project with its own strength, it is always necessary to avoid any mimic gesture of architecture servile to aesthetics of historic models, utilizing on the contrary contemporary languages and resources.

Lecture Halls: A collection of buildings articulated on the basis of a patio system, with passages and balconies that lean towards the interior. The lecture halls constitute a formal and typological reinterpretation of a spatial system that has been practiced in Latin-American cities since their foundation. In this sense and through the summon power that this elements have - patios, passages, balconys- we seek to infuse the buildings with the spirit of place.

Light: The search of an architecture that could evoke the cultural context is made evident by the necessity to achieve large and wide white walls, with scarce window or openings, and the liberty that reminds the aesthetic and utilitarian sense that local architecture grants to light. This desired image in contradistinction to the basic illumination requirements of the architectural program results in a double solution: One the one hand, the organization of the buildings around patios, true light conveyers, grants this set of buildings a change of scale required in regards to the exterior areas of the campus, and the spirit of place character that has been seeked.

On the other hand, the extense eaves that top the ceramic tile roofs lift to make way for controlled light required in the class rooms. In order to get this light to reach not only the areas of the top floor but also those of the bottom floor- and once again searching for flexibility for the exterior facades with scant windows- the decision was made to maintain the classrooms of the upper level free of the walls of the facade, leading to a skylight for the lower areas. The windows of the upper level cross this double wall until they attain the outer wall giving the sense of a robust wall in the facade.

Library: The introspect character of ecclesiastic Latin-American buildings, inherited by monkish European models, and its association to the image of knowledge repository , is given to the building that will shelter the University Library. Once again, the aim is a building inclined towards itself around a patio system whose importance within the functionality of the building is mirrored in its relation with the exterior: Facades composed of large white surfaces with scarce windows in contradiction with de openness and fluidity of the inner spaces, towards the patios, around witch the building revolves.

The tower of the library, of great evoking power, reminds of the prominent elements, of the churches of Sucre. A cantilever of 6 meters suspended over 12 meters on top of the floor, compose a monumental window destined to the contemplation of the magnificent range of mountains called cordillera los frailes to the west of the city. 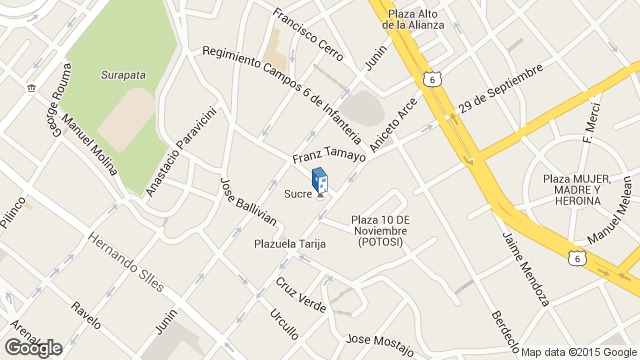