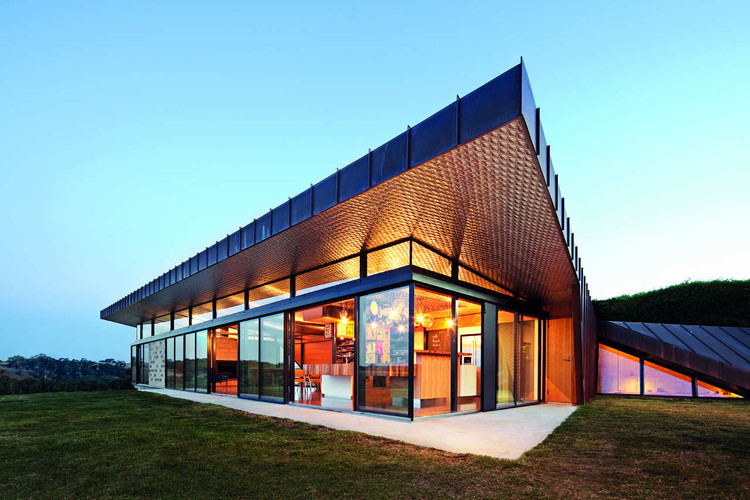 'Brent Knoll' is a new house by March Studio located on the outskirts of Victoria. Despite a brief to extend an existing 1850's homestead, it became apparent that the new extension be detached. Rather than a reinterpretation of a past architecture, the resultant became a celebration of both old and new. The two freestanding structures also continue a typical farm typology, where distributed structures, such as barn, out-house, and woolshed are connected by the outdoors and exposure to the elements.

Obscured by a dilapidated 1920’s lean-to, the 1850's cottage was revealed and meticulously restored, later housing guest bedrooms and a library. Beyond the initial gesture to detach the two buildings, site features, climate, and client were the three driving design tools which informed the new house. The clients, insisting they were great entertainers, desired spaces where not only people could gather en masse, but also private places to escape to and repose in the late afternoon.

The solution was to weave the new building through the site; twisting and turning where necessary, to create a variety of different internal and external environments. It is a modest sized addition at 230 sqm, however the resultant design provides a total of four bedrooms, two living spaces, three bathrooms, kitchen and dining; whilst outside, four new types of outdoor space are added to the existing two.

Extending a 150 year-old Cypress hedge, the gesture became a shield from the prevailing Southern weather allowing a protected Northern lawn with views down to the valley. The 'L' shaped plan of the homestead was referenced to generate a form that, while not simply mirroring the existing building, does suggest a rotational symmetry. A secluded courtyard between the two buildings is another type of space created, shaded by the homestead and ideal for the hotter months of the year.

The clients expressed a desire for large expanses of glass; hence the living spaces are housed in a double glazed box veiled by a folded roof carefully manipulated by sun angles. The result of the undulating roof are spaces which soar above the valley at one end whilst plunging into the ground at the other. The interior of the project is characterized by the contrasting of these spaces, and the materials in which they are finished, at times seemingly at odds with the restrained material palette of the exterior.

Internal materials and finishes, such as the pressed metal, concrete block work encrusted with resin and recycled antique advertising signs although somewhat ornate, are used in a natural unglorified state. Avoiding a sterile environment of glass and concrete, the rawness of these materials offer a warm, playful interior executed with minimal detail and fuss.

Sustainable practice is inherent within the project. The contractor and all his trades were from the immediate vicinity, double glazing combined with a concrete slab and correct eave orientation ensure manageable heating and cooling, water is harvested from the roofs of both buildings, and there is a waste management system to handle grey and black water.