Save
House F In Barcelona / RTA-Office 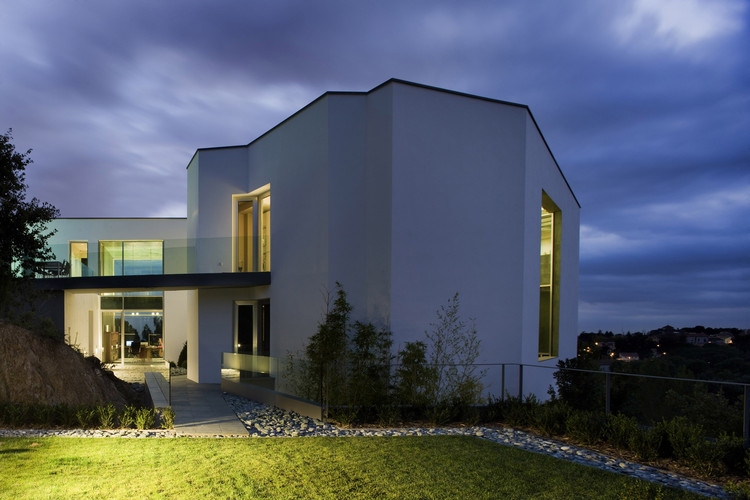 Text description provided by the architects. This house designed by Santiago Parramón (RTA-Office) has as main characteristic its location in a land with a high incline and a stream that crosses it. A rocky orography and the preservation of the most of the trees were the guidelines of the project.

The objective of Santigo Parramón was taken up minimally the site in order to give freedom to the stream, so they let you hear the sound of the water, the smell of vegetation, the textures... All of this come of top to the emotional aspect to the architected wanted.

Finally the architect decided preserve the site intact to lean on it an object, a big volume which rests in a minimum surface. The house only takes contact with the land through a central nucleus with small dimensions. It was an archaeological work where the architect worked as a surgeon in order to minimize the impact on the rocky land.

Santiago Parramón seeks that the project was understood as a unique object, that is the reason why the entire program and the interaction between it and the exterior is produced inside. The objective is to create a space inside the object, a carving object which has been penetrated vertically, horizontally and transversally and, at the same time, those penetrations allow to communicate with the exterior. These tunnels are completely covered (floors, walls and ceilings) with pale-blue quartzite.

Interior and exterior are white and all the interactions between them are solved with the same material, pale-blue quartzite whose characteristics give a soft reflex that makes possible that the nature enter inside. Only white and pale-blue: body and drilling.

By this way, the landscape can be seen through a glazed surface at the end of the corridor and also reflected in a kaleidoscopic way through inside. One of these vertical corridors allows to see the stream from the main room. Interior is completely coated of natural light having continuous and wide spaces. Magnitude can be felt in its full dimension.

The pale colour of the outside of the house seeks a contrast between the object and the vegetation. As soon as the vegetation and the trees grow up, the architect will reach its objective of discovering the house hidden behind the trees.

It is a Studio-house. The program is disposed in three levels. The main floor is located on the top level and just bellow there is a room’s floor. In the last level there are the complementary services. 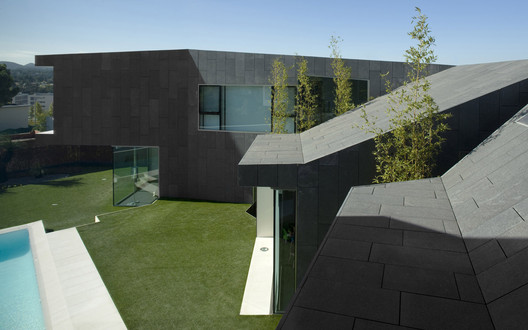