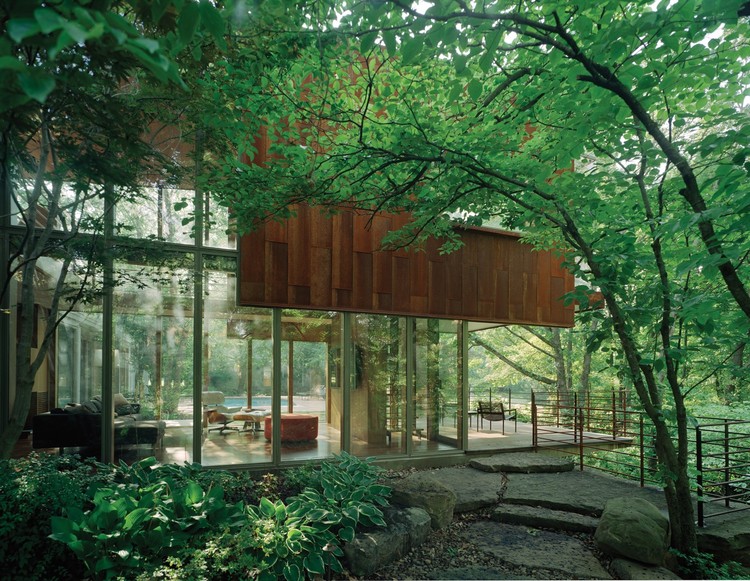 Text description provided by the architects. The challenge for the Arkansas House was to reassemble a fire-damaged home and introduce possibilities for re-thinking the house’s spatial character by adding new elements. The design had to be completed in three weeks and the details were resolved after construction began - one fragment at a time. The architects were allowed to work only in the fire-damaged zones of the existing house (exterior and interior), leaving the remainder untouched beyond new windows and a new HVAC system.

The low-slung existing tartan grid structure, with traces of both Kahn and Wright, was instilled with a new sense of hierarchy through the addition of light monitors and suspended lofts to the children’s spaces, a new kitchen, and a great room with a saddle-back roof for living, entertaining, and the display of fine art. Vertically oriented monitors bring much-needed light through steel windows into the once gloomy interiors most damaged by fire.

The great room is naturally lit from all sides and fills the center of the house with light and views to the sky and adjacent monitors above. With two children at one end of the house and their father at the other end, the great room is positioned to unite the family in one grand social space. The room cuts across the non-directional grid of the existing structure providing an enriched and contrasting spatial complexity. At the end of the mezzanine a flying wall - a vertical tableau - appears to float in space, the composition of its rusted metal shingles choreographed to the music of Neil Young and the Band.

Concrete block piers articulate the corners of each existing space and over time have settled differently, leaving few plumb surfaces to work from. Our tactic was to float cherry and walnut veneer panels over the pier walls and along the ceiling forming a detached interior skin. Flooring of rift-sawn cherry and walnut also act to form an interior liner. Taut and highly crafted, this refined surface acts as an interior liner to the exterior monitors clad in weathering steel shingles. There is a quiet resonance between old and new spaces, enveloped in the warmth of various American hardwoods - they combine for a new material presence that softens their differences.

Comfortably astride the old house, the angled shell forms exude empathy with a rusted barn nearby; the effects of weather and dripping tree sap provide their rusted surfaces with character - raw and visceral - a foil to the painted shades of beige on the walls below. Out of the ashes, a new structure emerges, a history continues; the old is transformed in the shadow of the new. 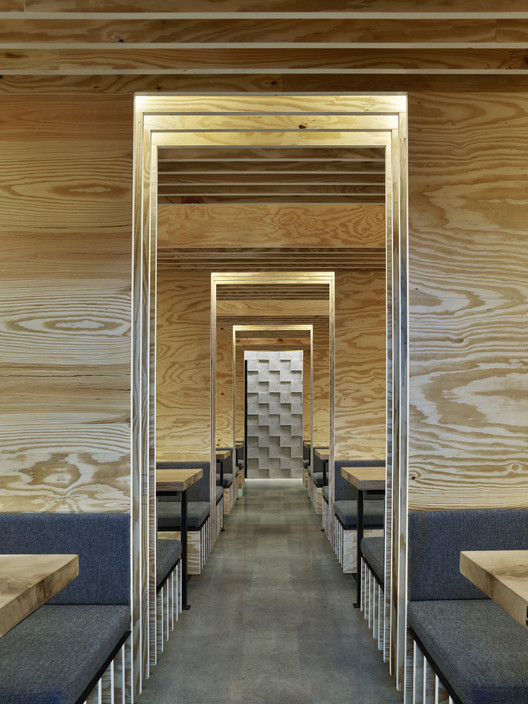 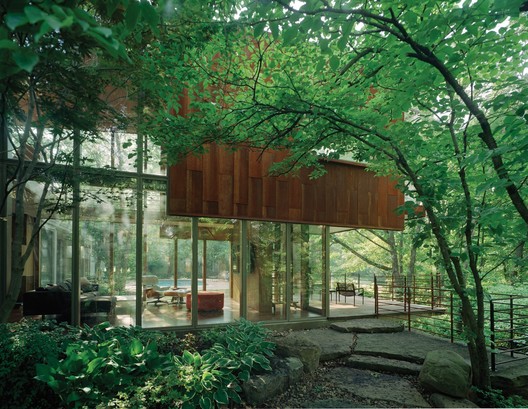