Text description provided by the architects. Hans Scharoun is a well known German architect best known for his design of the Berlin Philharmonic concert hall in Berlin, Germany. Completed in 1963, Scharoun’s organic and futuristic aesthetic interpretation for the concert was a replacement for the previous Philharmonic that was destroyed in WWII.

Scharoun’s design was fairly straightforward that focused on placing music at the center of his design, both conceptually and physically. From the center, the music would be amplified and filtered throughout the auditorium.

The Berlin Philharmonic’s program is very direct and simplistic requiring two music halls: a main auditorium that seats approximately 2,500 people, as well as a smaller Chamber music hall that would seat around 1,200 people; however, it’s not the program that makes this project interesting, but it is what Scharoun does spatially with the program that creates such a dynamic presence.

In the main auditorium, the stage is located at the center of the hall with the seating arranged around the stage through a series of offset terraces that were positioned for optimal acoustic performance.  In section, the auditorium appears as a concave fish bowl that projects the music in every direction.  The ceiling angles and drapes dramatically over the auditorium space capturing and projecting the sound in a rhythmic fashion.

Although the building is programmatically simple, formally the Berlin Philharmonic is complex in that the expressive interior spaces are reflected on the exterior of the building. The interior’s draping and angular composition are carried into the formal design of each halls volume. The angles and the swooping tent-like structure create a playful yet contained aesthetic that compliments the interior spatial conditions.

The exteriors dynamic façades compliment and establish a relationship with the Berlin’s Tiergarten, which is located immediately to the north of the Philharmonic. The angled and curvy facades mimic the “soft” aesthetic of the forested landscape. The facades yellow hued metal material maintains an earthy balance of landscape, color and form.

The Berlin Philharmonic may be Hans Scharoun’s most well known project, but it is a testament to the aims of organic architecture that establishes a harmony that mends concept, program, and context of music, the Tiergarten, and the discipline of architecture. 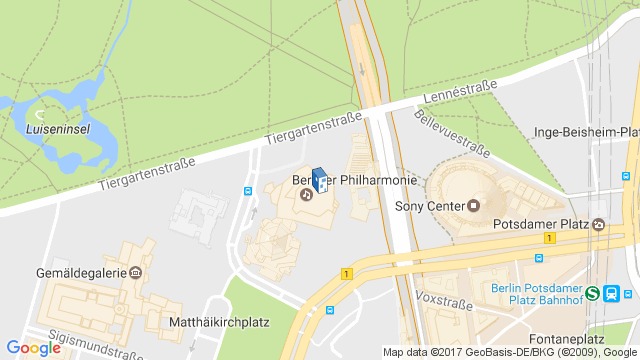 Location to be used only as a reference. It could indicate city/country but not exact address.
Share
Or
Copy
About this office
Hans Scharoun
Office
••• 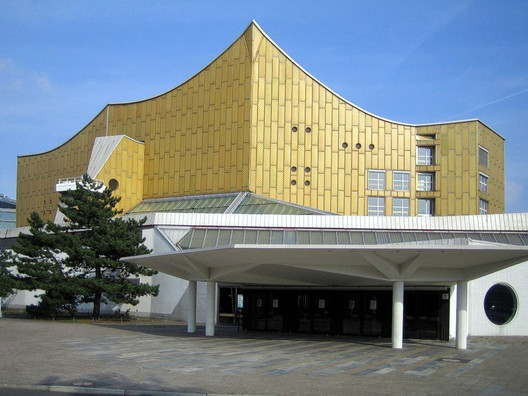