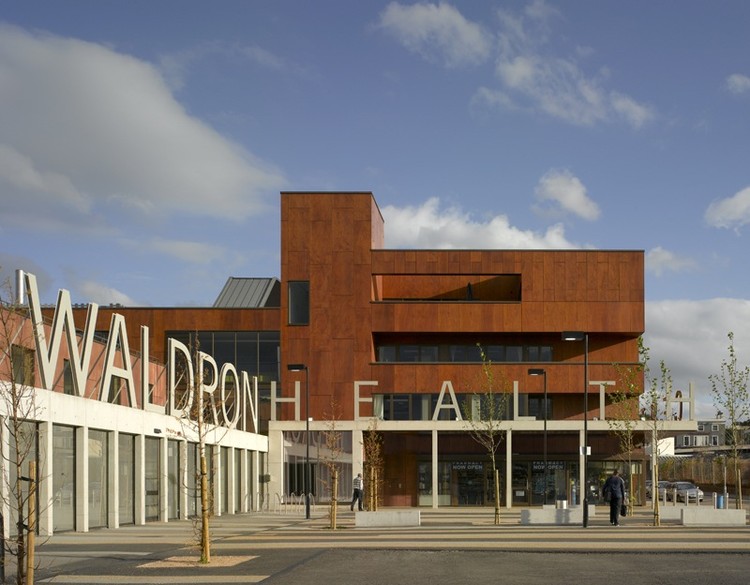 Text description provided by the architects. Designed to change people’s perception of healthcare, The Waldron is planned around a new civic square framed by the health centre, shops, and a 5-storey development with street level café. Inside, the 6,029 sq m health centre is organised around two courtyard gardens and a spacious foyer featuring a site-specific installation by artist Martin Richman.

Located in the London Borough of Lewisham just north of London’s South Circular inner ring road, in an area in which housing estates and tower blocks populate a discontinuous landscape, the new centre replaces an anonymous single storey health centre with a significant urban development that has a greater capacity to shape the fabric of the locality and form a backdrop for public activity.

The site, a north-facing peninsula block, neighbouring New Cross station is bounded by streets on three sides and sits on the western end of a pedestrian route - Douglas Way - that links local amenities including a leisure centre, arts centre and school, shopping street (Deptford High St) and park (Fordham Park). Community allotments occupy the southeast quadrant of the peninsula itself.

The design demonstrates the practice’s interest in creating a public building with the presence of a civic landmark that has the capacity to shape the daily lives of those living nearby, whilst at the same time retaining a level of intimacy necessary for clinical consultation. The plan is generated from the patient’s perspective. The design seeks to describe a narrative journey in five frames beginning with the square leading inside first to a foyer, then cloister, waiting room and finally to a clinical room.

The design conceives of a Z-shaped building that occupies the northeast and southwest quadrants of the peninsula and frames two contrasting public spaces – one, the existing allotments, the other, a new square in the northwest quadrant which opens up a diagonal route to New Cross station. The building rises from two storeys in the northeast to four in the southwest to complement the 3-storey brick Victorian school building on Stanley Street to the east. The concrete framed building is clad in a veneered rainscreen, which gives it a rich cherry wood colour redolent of Eighteenth Century furniture or a musical instrument casing, bringing a warmth and humanity to the building. Louvres on east and west elevations, acting both as solar protection and acoustic baffles, are fabricated from the same timber component further suppressing the repetitive windows. Bronze-anodised windows are variously proud, flush and recessed. Seen obliquely from the South Circular the Waldron appears as a large crafted timber cabinet in the city.

The square and west façade are framed by a canopy, concrete arcade and screen, all of which invite proximity and provide a counterpoint in scale and material to the greater building mass. Resting on the canopy are storey high super graphics WALDRON, HEALTH and CENTRE. Seen together they constitute a useful sign, but, seen apart, as they often are, they play a part in the composition of each elevation and in the sculptural and material character of the whole.

There are two key ideas at play in the design of The Waldron: the reciprocity between the social logic of the interiors and its capacity outwardly to shape or frame the allotments, square and adjacent streets; and, the dialectic between the homogenous largely timber elevations, in which the fenestration is evident and from certain viewpoints concealed by the fins; and the superimposition of the heterogeneous, both literal and abstract, counterpoint of the super graphic letters.

The square has a bitmac surface with resin bonded gravel strips in two colours - buff and grey - and is planted with London Plane and Redwood trees and lit by column lighting and populated with benches and cycle racks. It is framed on two sides by shops and in due course will be completed by a 5-storey residential building with a café on the north side of the square, the site for which has been sold to a private developer.

The health centre is planned on a 1.2 module, which is reflected externally in the modular arrangement of the cladding and windows. Rooms are arranged around two courtyards within two overlapping wings, north and south, separated by the 5-storey entrance foyer.

Inside the rich colour palette of the exteriors fades to a more subdued palette of beige and warm greys. The 5-storey foyer is characterised by a timber stair and balustrade and installation by artist Martin Richman.

Each wing accommodates two clinical clusters one of which can be accessed directly from the foyer, the second along a cloister that runs parallel to the wing bypassing the first. A planted court, into which both clusters’ waiting spaces overlook, separates the cloister and wing.

Ground, first and second floors are all publicly accessible, with the top floor solely for staff use. Facilities are arranged as follows:

Back-of-house administration space is coupled to the clinical space to enable clerical/ clinical discussions face-to-face to take place in a private space.

In the interiors, scale, proportion, light and views all play a role in orientation. The light monitor above the foyer admits south light. The cloisters are lit on both sides. The south one overlooks the allotments to the east and the north one overlooks the square to the west.

The Waldron makes a significant contribution to this area of London, providing the local community with a state of the art new healthcare centre and contributing a new permeable urban block and public space to the cityscape. 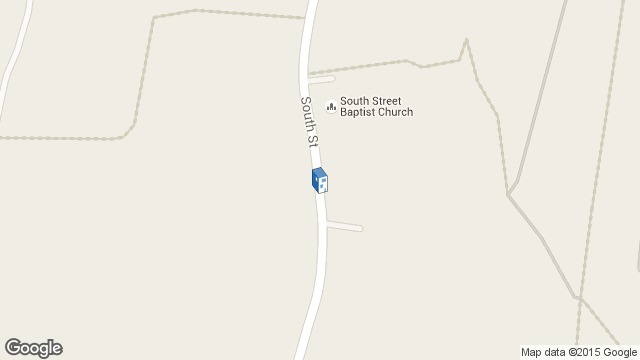 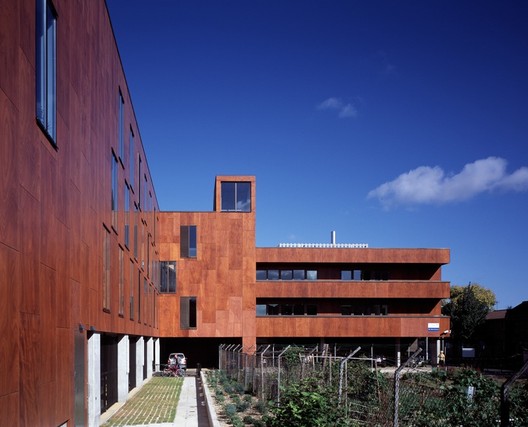