Save
LightHearted / Freecell and Peter Dorsey
Share
Or
Copy

LightHearted is the winning design for this years Times Square Valentine, an annual competition to deign and build a heart for Times Square. Designed by Freecell, a 2010 P.S.1 contestant, in collaboration with Peter Dorsey, the ten-foot diameter heart is a light weight construction, with five pairs of aluminum elliptical loops radially arranged with rotating connections. The structure is covered with an open weave red fabric that both captures and reflects light while letting wind pass through.

LightHearted is an interactive installation, six people will hold the heart up for fifteen minute intervals. The ten-day event, February 10 to February 20, will need over 2,600 volunteers to share in this collective experience. 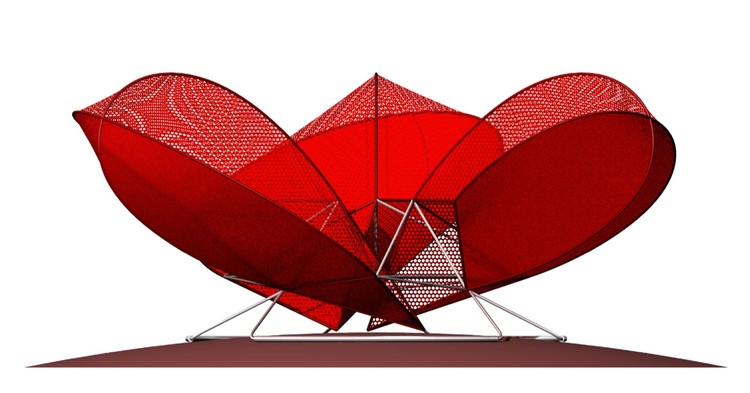 Can you imagine a heart in Times Square lifted and held by the communal spirit of people? If just a few of the thousands of passersby help to hold the heart high in the air for a minute, it could levitate indefinitely.

Every morning at ten o’clock, the heart is unlocked, and untethered by its keeper. The morning crowd gathers around and, on the count of three, lifts it high in the air. Weighing less than fifty pounds, each of the six participants will need to hold only eight pounds – the approximate weight of a gallon of water. As arms get tired and schedules need attention, the next person in line comes to hold the heart. The duration can be as short as thirty seconds and as long as thirty minutes. The crowd spirals around its base, waiting for an individual turn to accomplish a collective task. Couples are photographed holding it together as singles flirt in line – two in, one out, three in, two out, until nine o’clock in the evening.

When people are holding it, the heart reaches ten feet above the ground and is ten feet wide. It is clad with an elastic open weave fabric that allows wind to pass through but still captures and reflects light. The frame is made of a lightweight aluminum tube that forms curvilinear volumes in the top half of the lobe and a triangulated frame on the lower half of the lobe. These lobes rotate around a ring that allows the heart to transform from its closed (DOWN) position to an open (UP) position. The two positions allow the heart to lie flat on the ground until the collective lifts it and gives it form. In its resting position, the heart rests on a hemisphere mound that rises nine inches. The slight elevation defines the zone of the heart within Duffy Square, allowing the participants to feel that they are entering into a zone with no obstructions.

During the day the heart has a subtle color and clear structure from the vantage point of the distant observer. But from the point of view of the participants, the color is bold since they can peer inside where the sunlight intensifies the red of the inverted fabric. In the evening, it is lit with light emitting diodes that discharge a bright and even light. Held by the people, the heart is above the dark pedestrian level, hovering in the air with the billboards.

The iconic heart attracts employees in the nearby buildings and visitors from far away to hold it. This symbol asks groups, couples, and individuals to come together as a collective to hold it. It does not ask for a lot of effort, but it cannot exist without participation.