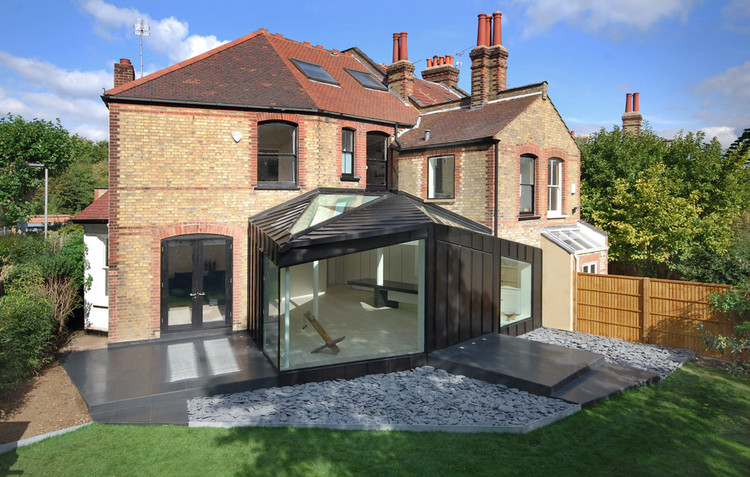 Text description provided by the architects. The original builder of Park Avenue South was also the house’s first resident, who made the most of his triangular plot by allowing the side of the building to fan out to meet the line of the adjacent public footpath. On the ground floor this resulted in an additional fillet of space splitting the living and dining rooms. It was the divisional nature of this space (used as a utility room) that the client wanted to resolve. Further to improving the organisation of the plan, the Client was keen to enhance the relationship between the house and garden; the existing views were restricted in both orientation and size.

By relocating the utility room to the heart of the house, and integrating the kitchen and dining spaces the plan was reordered and paved the way for an extension that unified the principal rooms. The design was developed through a series of folded paper sketch models exploring the nature of the triangular plot, the geometry and aspect.

The scale of the extension was governed by the parameters of the current permitted development legislation. Volumetric calculations determined the maximum allowable capacity, which in turn formed a boundary to the geometric exploration. The lines of the roof ridges were drawn out from two points on the rear wall of the house, whilst the elevations extended the lines of the living room and the external rear wall of the kitchen.

The structure is clad in black zinc with standing seams tracing a path across the roof. From a distance, the structure reads as a strong geometric form that has grown out from the back of the house, but at closer quarters, its edges appear to soften and the malleability of the zinc cladding and the very slight billows in its surface come into focus. The impression formed is of a tailored garment turned inside out to reveal a complex structure of pleated seams.

Large areas of frameless glazing and triangular roof lights pierce the zinc allowing uninhibited views through to the light envelope of the interior. Two solid doors lead from Assaluto Nero granite terraces - the larger door weighs 300kg into the extension. The simple gesture of opening these doors dramatically changes the space: from a cocoon to a garden pavilion.

The white ash floorboards and white facets of the ceiling form a bright lining to the dark outer-shell. The open-plan space is divided by a long work bench clad in mitred Assaluto Nero granite. A step down into the kitchen allows this bench to form a counter top and cantilevered table.

This geometrically complex extension uses a lightweight steel frame to form a facetted surface for the glass and zinc roof. The setting out of the steel frame was immensely complex given the angles and twists of every beam. By digitizing a simple plywood model, detailed setting out drawings were produced.

The secondary timber structure allowed for the roof and the walls to be ‘super insulated’ offsetting the large area of glazing. All of the double glazed units had a low-e coating to provide an element of solar shading. Internally a tertiary timber structure was used to set out the feature internal plasterboard ceilings.

Traditional zinc details were modified to allow the standing seams to track up the walls and across the pitch and fall of the roof. Particular attention was paid to rainwater run off, integrating a gulley within the roof valley. Careful detailing at the head and cill of the doors enabled the drip details to be incorporated within the face of the cladding allowing the doors to sit flush with the external walls.

The use of VM zinc negated the need for a ventilation zone allowing the zinc to tuck over the aluminium glazing support angles. The matt black spacer within the glazing unit was then lined through with the internal finishes and the tailored feel of the building is complete.