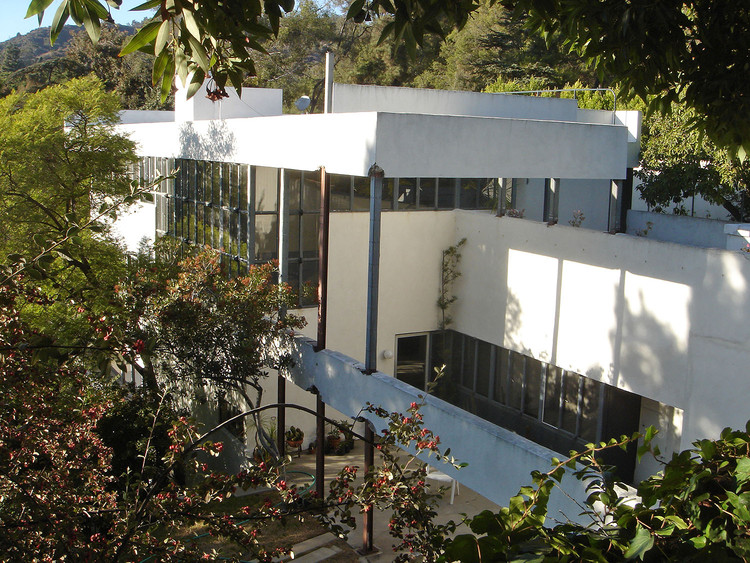 Text description provided by the architects. The 20th Century was one of the most inspiring and progressive centuries for the discipline of architecture; Richard Neutra was one such contributor that has left his mark on modern architecture with his advancement of residential design. Prior to the Kaufmann House, Neutra design the Lovell House for Philip Lovell and his family in Los Angeles, California between 1927-1929. The Lovell House was the turning point in Neutra’s career, putting him on the architectural radar.

The Lovell House was designed for the active, health conscious Lovell family in the hills of Los Angeles.  The house is an early example of the International Style in the United States that evokes principles that were developed by Le Corbusier and Frank Lloyd Wright.

The house consists of a series of overlapping planes that do not stick to Wright’s proportionality; rather they are a hybrid of Wright’s planar devices combined with Le Corbusier’s stark, streamlined aesthetic.

The house clings to the side of a steep cliff; it is perpendicularly suspended to take on the panoramic views of Los Angeles.  Since the house is suspended perpendicularly, the volume of the house is disconnected from the street, which is bridged by a concrete walkway that brings the inhabitant into the upper level of the house, which is the living quarters, and issues them down a large staircase encased in glass that leads into the living room and to the pool outside.

The lower level of the house, the living room, follows an open plan that leads out to the patio and swimming pool.  It’s outside near the pool that one begins to understand the spatial organization of the overlapping planes and the pilotis that support the cantilevering volumes.

The Lovell House is reminiscent of Le Corbusier’s style and aesthetic. The stark while walls stand out among the wooded terrain; the ribbon windows offer expansive views and a significant amount of light to enter the interior spaces.

It’s clear that Neutra was influenced by the International Style and Corbusier’s villas, so much so that the way in which one enters and moves through the house is similar to Corbusier’s architectural promenade; however rather than ending at the roof garden the occupant moves from the top of the house towards the patio and swimming pool on the lower level.

The Lovell House is claimed to be the first house in the United States to use a steel structure that is typically found in skyscraper construction – Neutra learned these new techniques when he was working in New York and with Holabird & Roche in Chicago.

However, the steel construction is not just supported by steel columns, beams, and pilotis, but it is only part of the structural system of the house.  Because the house is suspended on the side of a cliff, it is tethered to  the cliff by a tension cable that is tied into the rocky terrain. The house’s construction is rather interesting in addition to the steel structure integrated with tension cables; the house is actually one of the first uses of gunite .

This building is part of our Architecture City Guide: Los Angeles. Check all the other buildings on this guide right here.