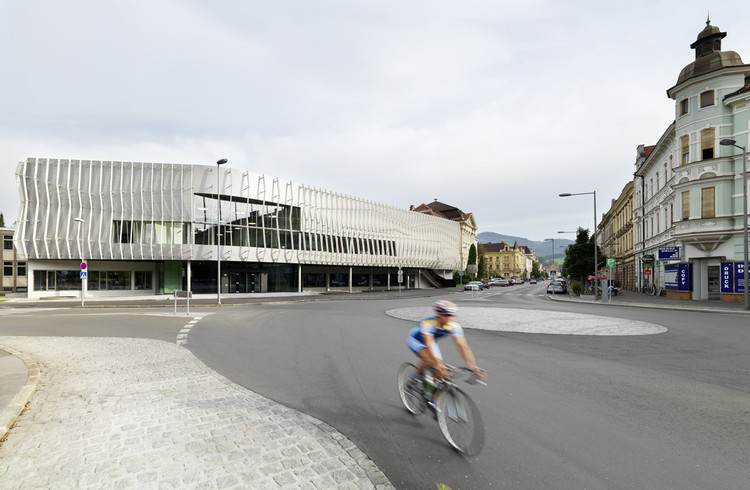 Text description provided by the architects. The lecture hall building of the University for Mining and Metallurgy of Leoben was planned and constructed in the early 1970s altogether in line with modernistic and functionalistic architectural thinking. It is part of a building complex consisting of several faculty buildings, workshops and laboratories organised along an access tract and connected with existing buildings from the 19th century but otherwise insensitive to the urban context.

Besides the thermal improvement and adaption of building services a fundamental functional rearrangement of the building was necessary, since the University organises a large number of high-profile symposia and conferences as a result of its research activities which was leading to conflicts with everyday university operations. Moreover, we were interested in the unresolved urban planning situation. We decided to respond to both problem areas with a new, vaulted layer of construction facing the public area. This new curved building responds to the flow of the street and the prominent location of the complex at an important roundabout. From a functional point of view, the new building takes on the task of either separating or connecting processes within the complex as required. It is now possible to stage presentations and receptions independently from everyday university business - normal lecturing in the two smaller halls runs independently. When not booked for events the additional areas have become an attractive lounge area for students. New useable areas were also created on the ground floor – an additional lecture hall and new seminar rooms.

During the building process the conrecte building structure was revealed and showed beautiful ribbed ceilings. This discovery influenced our design concept and we decided to work with these “historical” features. Our design decicions can be seen as interpretations of what already lay before us. We left the reinforced concrete ceilings visible in all access and casual meeting areas, sanitised them with some paint and applied acoustic and lightning measures in an extra layer suspended from the ceiling.

In the lecture halls the design aspect were reduced to a minimum in order to emphasise the “functional” character of these rooms. In line with its variety of usage requirements, the Audi Max is not only a lecture hall but also substantially more extensively equipped as a conference and event hall. Therefore it is furnished more lavishly, still the design of its walls and ceiling reflects the linear and orthogonal taxonomy of the entire complex.

The question as how to design the façade was of particular interest. The smooth grey aluminum surface highlights the curvature of the enlarged first floor. The large window aperture indicates the foyer and the entrance of the Audi Max. Through this large glass surface the foyer communicates actively with its surroundings. Vertical, white-painted steel slats featuring high and low points according to a defined pattern cover the building with something like a landscape image. Depending on the point of view, changing lighting situations throughout the day and individual traffic in the street the façade will yield ever-changing impressions of the building. 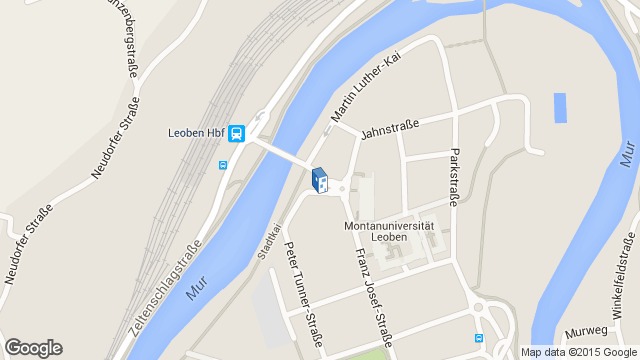 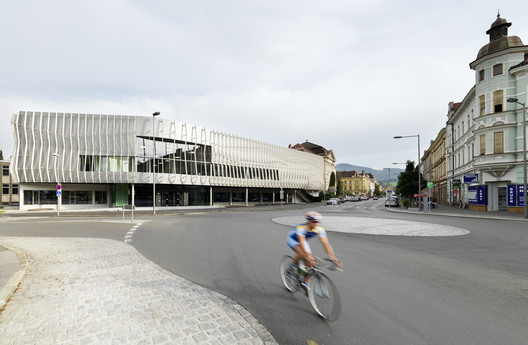