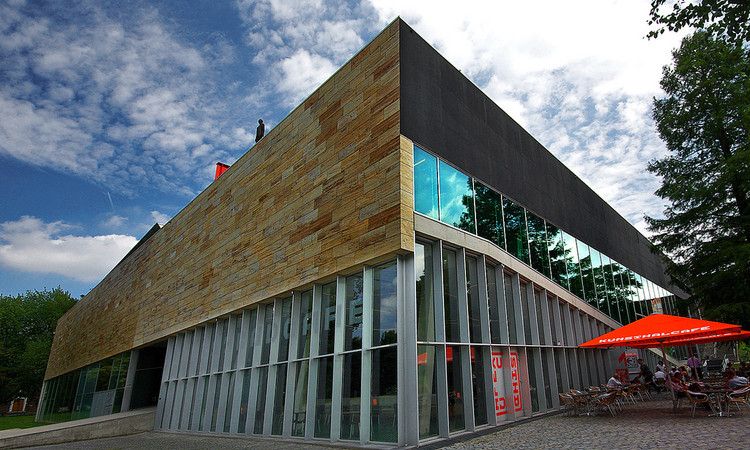 Text description provided by the architects. Arguably one of the most spatially innovative architects in the world, Rem Koolhaas, and his firm OMA, designed a cultural staple in the city of Rotterdam. Completed in 1992, the Kunsthal, in the Museumpark neighborhood of Rotterdam, is more of a cultural center that it is a museum. Dubbed as a collection-less museum, the Kunsthal is a compilation of several galleries and halls that allow for maximum flexibility and accommodate a multitude of exhibitions and activities that can coexist singularly or collectively.

Situated along Maasboulevard, an expressway on top of one of Rotterdam’s largest dikes, the 3,300 square meter museum serves as a bridge between the busy expressway and the museum park to the north. The museum sits as a subdivided volume of four autonomous parts that are created by two intersections that are extensions of the surround city.

The first intersection is a road that runs east/west across the site, while the other is a wide pedestrian ramp that slopes down from the southern end of the site to the northern part, which provides a gentile transition between the elevated dike and the lower level park behind the museum.

These intersections reinforce the conceptual framework for the spaces throughout the building, as being separate, yet unified. The intersections also express the museums design as a volumetric study rather than a planometric or sectional design strategy.

The volumetric design creates more of a compositional effect that is read as almost a kit of parts or a series of spaces becoming one cohesive system through the spatial juxtapositions and orientation of each space.  This spatial unification through separation heightens the dynamic qualities of each gallery and hall.

Even though, the volumes are divided and autonomous, Koolhaas was able to create a continuous spiraling circuit that connects the spaces through a series of ramps and interchanges that happen both above and below ground.

The spiraling circuit is created by the interstitial space that mends the different experiences of each space.  Each moment of interchange transitions from one space to another as one fluid system, which is siginificant especially since the museum is understood to be collection-less and at any point in time the museum can be showing old art, new art, architecture exhibitions, sculpture, or photography displays.

These intersections are not only modes of circulation through the site, nor are they just conceptual urban flows that subdivide the larger volume of the building, rather they provide new spatial conditions for programmatic placement, visual connections, and entry.  One example of this would be the main entrance to the Kunsthal museum where the pedestrian ramp that runs north/south through the site meets the sloping ramp of the auditorium.

As the two ramps meet at the lowest central point a new point of entry is established. Also, as the slope of the ramp for the auditorium seating begins to separate from the circulation ramp that runs parallel to the auditorium seating one can see into the restaurant that is placed underneath the auditoriums sloping surface.  The Kunsthal is a series of spatial conditions and juxtapositions that even though programmatically different and separate begin to reveal themselves to one another to create a seemingly unified system.

As with most projects there are columns, beams, maybe some tension/compression cables, and lateral bracing, however, there are moments where structure appears where common perception and traditional rationalism would state otherwise. The structure of the Kunsthal is not a means to an end, but as a way to enrich the spatial dynamism of the galleries and halls.

In one of the galleries on the east side of the building, there is a series of red tubes that weave in between the roof trusses and connect to create a semi-circular lattice. Most visitors think that it is a sculpture that’s integrated into the structure, but it is Cecil Balmond’s take on a non-linear lateral bracing system that has intent to add to the spatial efficacy of the gallery rather than a system that acts passively and is unseen.

"The detailing in the Kunsthal is a mode of detailing that frees the attention for other aspects such as the way the ground is read, the sensing of abstractions, of transparency and translucency, of concrete and of the conditions themselves. The sensing of a whole instead of all that fixation on the joins and the encounters."  - Rem Koolhaas 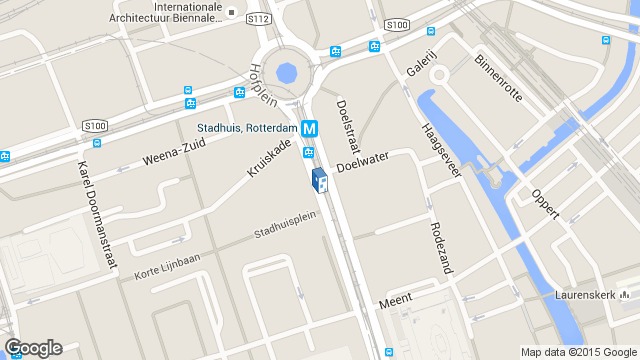 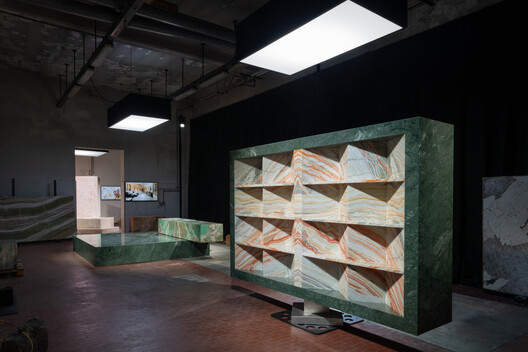