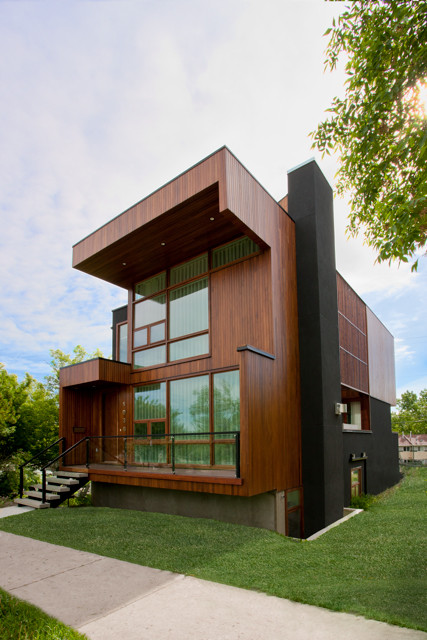 Text description provided by the architects. Located in the inner-City, issues of privacy, occupation, served/servant spaces, affordability and available sunlight defined the context for design. Competing goals of maximizing square footage versus creating exterior amenity spaces, under the legislative constraints imposed by by-laws, created an opportunity for a kind of case study.

The conceptual driver for the project was the exploration of a fundamental served/servant relationship, in which servicing costs are adapted to the specific limitations and opportunities of a small infill lot. The programme is first divided into 2 simple boxes, one a enclosed box while the other is a transparent articulated volume. The interface between the two volumes becomes conditioned through the addition of a courtyard into the served space, begins to articulate the building envelope through the creation of more surface area.

The integration the courtyard into the core of the house, became the central feature of the project and serves multiple functions, both spatially and programmatically. At its most fundamental level, it becomes a “lightbox”, allowing generous amounts of daylight to wash into the core of the residence. This is unlike most infill houses, whose interiors become tunnel-like as a result of building by-law and code limitations.

Around this courtyard, the programme re-orientates itself, with the interior spaces becoming re-focused to this exterior lightbox. This effectively liberates the programme from the limitations of its infill location, reversing the typical response of maximizing square footage. Instead, the project creates an exterior space that conditions the interior volumes through light and connections to the outside. The large interior glazing walls facing the lightbox can slide away, allowing the exterior patio to become part of the residence in the summer, blurring the separation between interior and exterior space, while providing multiple opportunities to engage.

The next component is the organization of the circulation around the courtyard. The entrance way expands into a bar of circulation and amenities anchoring the house, while it also becomes a promenade around the lightbox. The exterior space becomes an activation point for circulation, visually, but also spatially, allowing multiple opportunities to engage with it. A second wrapper folds over this bar to create large multi-use spaces with views to downtown and a focused view of the courtyard. It also becomes permeable at the second floor, creating a screen that filters light and provides privacy, but also acts to define the courtyard volume.