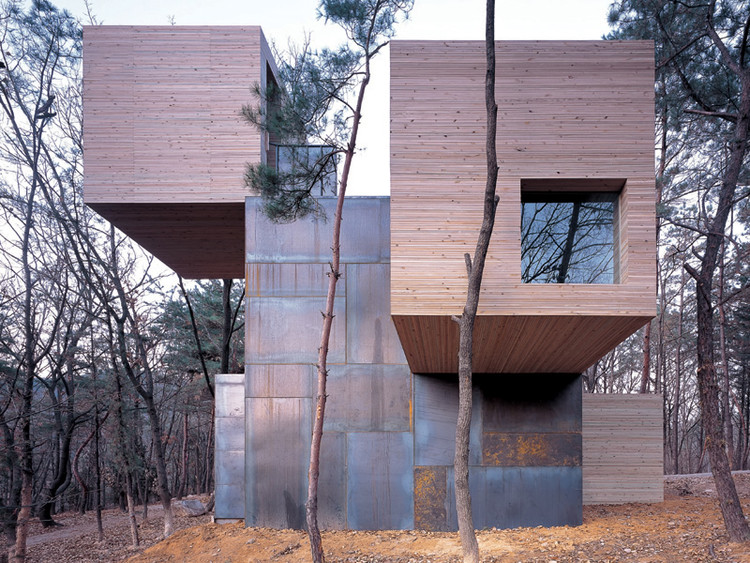 Text description provided by the architects. I received an interesting invitation last May. In the Seoul metropolitan area there is a satellite city called Anyang, a small, in Korean context, suburban town with 700.000 inhabitants.

The city had decided to invite several international architects and artists to participate the design of a new park. The project, called Anyang Public Art Park, relates to the concept of art and architecture parks in Japan, the largest of which is Echigo Tsumari Art Triennial area in Niigata.

Following the Korean life rhythm and style the timetable was very tight. Planning started already while choosing the site. Sketches were to be delivered the next day. Due to the rushing I had difficulties to follow the constant changes in my drawings. Luckily I could redo some of the important details later while working on the construction site. Working with the Koreans was in spite of lack of time very pleasant, sometimes even funny.

The park is situated in a river valley. The building itself is standing on top of a small forest hill, along an outdoor route leading to the mountains in the far end of the park. Main space is a larger steel cube. Four smaller wooden rooms are connected to this space in different floors. In each of these small rooms there is the presence of one nature element; In cellar water, on courtyard soil, in first floor fire and in the attic air.

On practical level, the idea of the work is to offer a simple shelter where the hikers may rest, enjoy their lunch, have a view over the mountains or light a stick of incense. For this purpose Norwegian artist John Roger Holte has crafted a platform and storage for the incenses out of coloured concrete. This habit relates to the history of the valley as an important Buddhist retreat. There used to be many temples situated on the mountain area, only few of which are left today. However, I was told that there are even older shamanistic rituals left, and services available if needed.

Main building materials are steel and wood. Concrete has been used to cellar and foundation.

Openings are covered with safety glass, floors with jade and marble gravel, different stone type and colour in each space.

Seoul is an immense urban area the fast growing of which is visible in the condition of the surroundings. Constant noise, packed motorways, endless rows of cloned blocks of flats and ever prevailing grey smog create a tough place for living things. I hope this small building in the edge of the city and the forest would offer some contrasting atmosphere. If someone ever, walking by in an everyday hurry, decides to stop and sit down and allows silence to take over, lets thoughts wander, this work has reached its goal. 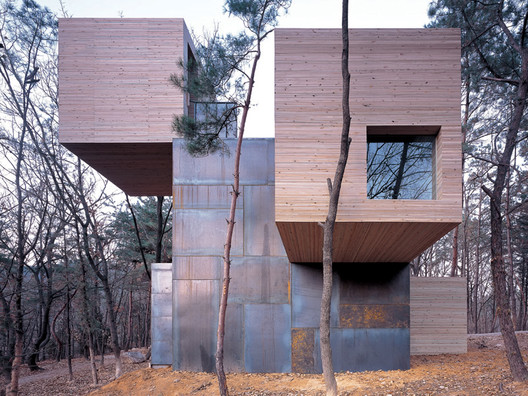