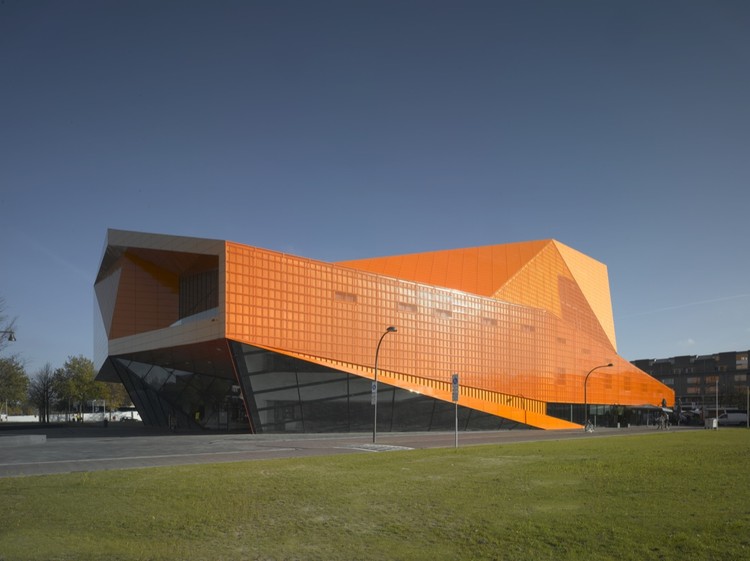 Text description provided by the architects. The Agora Theatre is an extremely colourful, determinedly upbeat place. The building is part of the masterplan for Lelystad by Adriaan Geuze, which aims to revitalize the pragmatic, sober town centre. The theatre responds to the ongoing mission of reviving and recovering the post-war Dutch new towns by focusing on the archetypal function of a theatre: that of creating a world of artifice and enchantment. Both inside and outside walls are faceted to reconstruct the kaleidoscopic experience of the world of the stage, where you can never be sure of what is real and what is not. In the Agora theatre drama and performance are not restricted to the stage and to the evening, but are extended to the urban experience and to daytime.

The typology of the theatre is fascinating in itself, but Ben van Berkel, who has a special interest in how buildings communicate with people, aims to exploit the performance element of the theatre and of architecture in general far beyond its conventional functioning. As he recently stated: “The product of architecture can at least partly be understood as an endless live performance. As the architectural project transforms, becomes abstracted, concentrated and expanded, becomes diverse and evermore scaleless, all of this happens in interaction with a massive, live audience. Today, more than ever, we feel that the specificity of architecture is not itself contained in any aspect of the object. The true nature of architecture is found in the interaction between the architect, the object and the public. The generative, proliferating, unfolding effect of the architectural project continues beyond its development in the design studio in its subsequent public use.” (Ben van Berkel and Caroline Bos, Design Models, Thames & Hudson, 2006).

The facetted outlines of the theatre have a long history in the work of UNStudio and Van Berkel & Bos Architectuurbureau before that. In this case, the envelope is generated in part by the necessity to place the two auditoriums as far apart from each other as possible for acoustic reasons. Thus, a larger and a smaller theatrical space, a stage tower, several interlinked and separate foyers, numerous dressing rooms, multifunctional rooms, a café and a restaurant are all brought together within one volume that protrudes dramatically in various directions. This facetted envelope also results in a more even silhouette; the raised technical block containing the stage machinery, which could otherwise have been a visual obstacle in the town, is now smoothly incorporated. All of the facades have sharp angles and jutting planes, which are covered by steel plates and glass, often layered, in shades of yellow and orange. These protrusions afford places where the spectacle of display is continued off-stage and the roles of performer and viewer may be reversed. The artists’s foyer, for instance, is above the entrance, enabling the artists to watch the audience approaching the theatre from a large, inclined window.

Inside, the colorfulness of the outside increases in intensity; a handrail executed as a snaking pink ribbon cascades down the main staircase, winds itself all around the void at the centre of the large, open foyer space on the first floor and then extends up the wall towards the roof, optically changing color all the while from violet, crimson and cherry to almost white. The main theatre is all in red. Unusually for a town of this size, the stage is very big, enabling the staging of large, international productions. The intimate dimensions of the auditorium itself are emphasized by the horse-shoe shaped balcony and by the vibrant forms and shades of the acoustic paneling.

The theatre is the most recent culmination of the interest Ben van Berkel has often expressed in exploring attractiveness, as this quotation from a recent publication shows: “The aim of our architecture is to intensify the gaze, to inspire thoughts and images and thus make it attractive for people to stay longer and return to the places we make for them. Keeping it light and almost scientific is our policy; the ploys invented to intensify the gaze are directly related to the traditional ingredients of architecture: construction, light, circulation, and so on.” (Ben van Berkel and Caroline Bos, After Image, 2006). The architect considers the Agora Theatre one of the most challenging projects he has undertaken, resulting in unusual and highly creative inventions, such as the handrail. 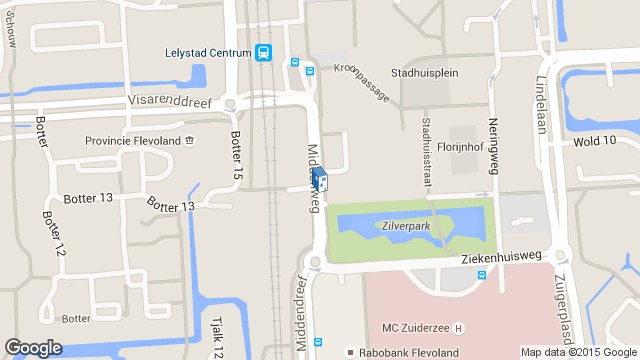 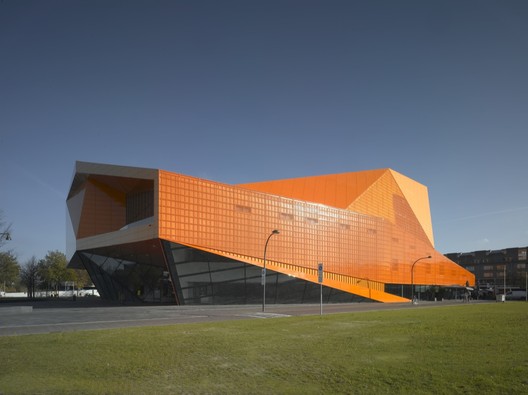