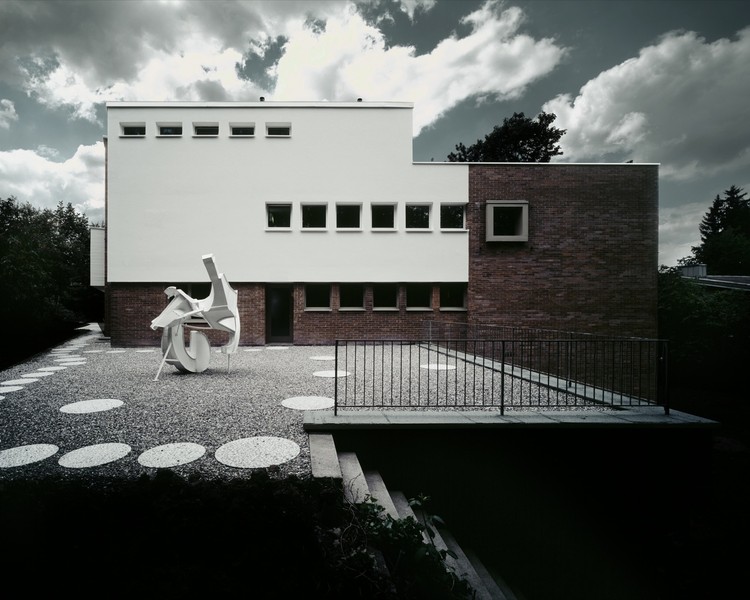 Text description provided by the architects. The residence in Küsnacht near Zurich is a late work of the Swiss architect Theodor Laubi, built in 1956 on a plot of land with an ample garden and flanked by a forest. After several changes of owners and their corresponding conversions and extensions the house had lost its original modernistic character.

In 2005 the residence was fortunately taken over by new owners (a young couple – a gallery owner and an artist) who recognised the potential of the house. The opening of a gallery for contemporary art in the ground floor not only revitalised the house but also transformed it into a partial, semi-public building that profited the whole surrounding residential area.

In the process the two new residents, having lived for 10 years in cities like Berlin and London, skilfully introduced a piece of metropolitan lifestyle to this idyllic single-family house with its view over Lake Zurich. This functional reorientation and the shift in the spatial program added an additional dimension to the house – an exciting hybridism and the opportunity to reinterpret many of the rooms. This particularly applies to the art gallery, which rather than presenting itself as a “White Cube” is a salon for contemporary art that consciously and gracefully coquets with the domestic homeliness of its surroundings. A surviving series of photographs from the 1950s bear witness to the care and attention originally paid to the architectural expression of the building, evident for instance in the slender window profiles and the overall purist modernist appearance.

The aim of the conversion undertaken by Fuhrimann Hächler Architects was to not merely restore the original character of the house (which required the demolition of a lean-to garage), but to amplify and even accentuate the rudimentary remanents of the original architecture in order to heighten their contemporary relevance and to anchor the architecture in the present-day.

Particularly the encrustations on elements such as the curved staircase or the concrete slats, which once denoted the somewhat more liberated architectural language of Brazilian Modernism, were peeled away to reveal the hidden qualities in their original lustre.

For example the former wash room with its adjacent terrace for hanging the laundry, featuring a wonderful façade element of concrete slats, was transformed into a particularly attractive kitchen for the upper apartment with a terraced balcony. The beholder becomes fully aware of the notably Mediterranean touch in the existing concrete lattice, allowing its “Brazilian” flair to unfold.

A typical characteristic of South American Modern architecture of the 1950s was the juxtaposition of individual freely rounded forms with the strict orthogonal geometry in the organisation of most of the floor plans. The design of the new built-in kitchen elements and furniture consciously adheres to this impulse in order to deepen these tensions and contrasts.

The rounded corners in the corridor in the upper storey allowed for the seamless application of wallpaper with a tree trunk motif, interiorising the woods adjacent to the house and internalising the forest house atmosphere. The motif stretches over a bookcase integrated into the wall, transforming the wall into furniture in the process and opening the various construction elements to reinterpretation or hybidisation.

The materialisation generates a consistent and restrained atmosphere that does not clash with the exhibited contemporary art, but rather seeks to compliment and highlight the pieces. The unconventional colouring, with its nuances of olive-green and brown, once again echoes the theme of forest setting of the house, lending the architecture a particular touch in a discrete and individual way.