See Inside Le Corbusier's Mind with These 5 Paintings

Marking the fiftieth anniversary of Le Corbusier’s death, Galerie Eric Mouchet is collaborating with Galerie Zlotowski to showcase Le Corbusier: Panorama of a Lifetime’s Work in Paris. The exhibition, opening April 23 and on view through July 25, will provide a comprehensive overview of paintings, drawings and engravings of the legendary Le Corbusier.

“Le Corbusier, who was never without a sketchbook in his pocket, devoted half of every day over a 45 year period to writing, painting and drawing - what he called his ‘Atelier de la recherché patiente,’” says the galleries. “His visual arts output was both highly original and prolific, stretching from 1917 to 1965. Up to the Second World War, this work was largely for his own personal research. Later, however, it helped drive the design and promotion of the Modulor, a ‘harmonious’ scale of proportions he devised in 1946.”

Take a look inside Le Corbusier’s mind and preview five of the prolific paintings that will be exhibited, after the break.

A curved street grate becomes an umbrella for a shepherd and his sheep, and a construction site is transformed into a fortress for mop-wielding guards in the interactive street art of French artist Charles Leval, better known as Levalet. Seeking inspiration from the Parisian streets, Levalet is known for his site-specific, India ink drawings that playfully interact with their surrounding architecture. “Topography is very important for me, this is why I always check a place out before I work on it,” Levalet said in an interview with Underground Paris. “I try to mix the world of representation with the real world by playing on the physical cohesion of the situations I put up. Architecture supports my work. Then I work on staging the artwork with photographs.”

See a selection of Levalet’s work after the break and check out his personal website and Facebook page to learn more. 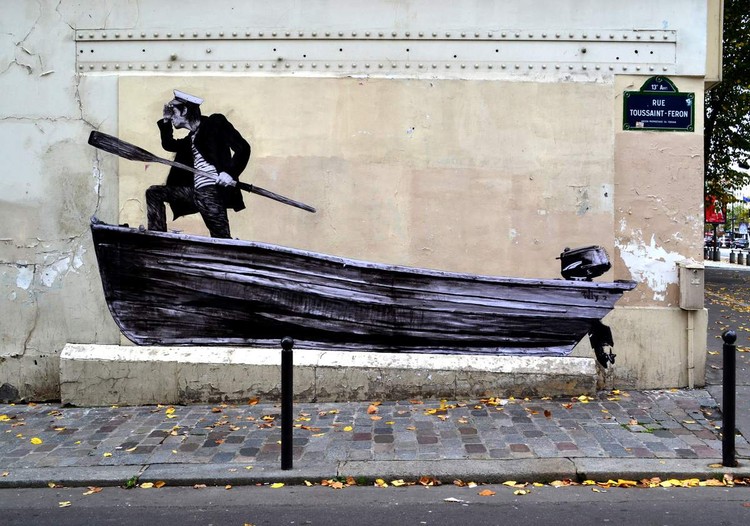