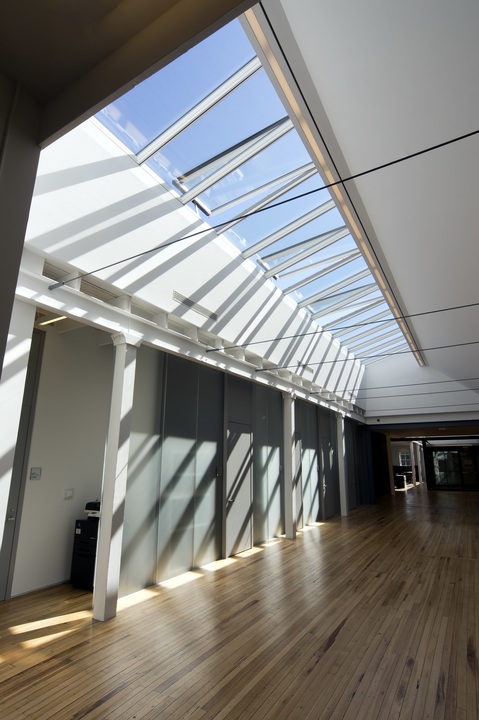 As one of the most iconic college structures in the United States, the19th-century Sibley Hall dome has been a visual reference point on the Cornell University campus for 122 years. Originally constructed in the late 1800s, by the early 2000s Sibley Hall had undergone numerous transformations. The third floor, having served as an engineering lab, design studio, and home to the university Fine Arts Library, was in great need of attention.

On the roof of Sibley Hall were two skylights that were decades old and had frosted over and faded with time—the amount of natural daylight coming through the skylights had been reduced significantly. The exterior steel frame of the building was in extremely poor condition and leaked; and, after many years of housing the weight of the Fine Arts Library, the top of the building had begun to spread apart and the exterior walls were cracking.

The challenge was how to modernize East Sibley Hall’s third floor in line with the college’s goals of colocating faculty offices adjacent to student’s studios and creating a collaborative, multiuse space; maintain the integrity of the designated historic building, and satisfy the discriminating needs of the Cornell AAP architecture faculty. The renovation also needed to satisfy deferred maintenance issues, including structural repairs, window replacements,
and a new roof.

After conducting extensive research, LEVENBETTS chose the VELUX Modular Skylight system to replace the existing skylights. VELUX supplied a custom-designed, pre-engineered, all-in-one modular skylight system that simply snapped together, like Legos, in six-module sizes and configurations. All six-module designs were made with LowE3 tempered glass. VELUX Modular Skylights were designed in partnership with the London-based architectural firm, Foster + Partners. To reduce thermal transfer between outdoor and indoor environments, the skylights use a proprietary pultruded fiberglass polyurethane frame.

East Sibley Hall is the first U.S. building to install the recently introduced modular system. What makes these skylights different is that, like traditional windows, a single module panel can be easily replaced, if necessary, by simply sliding in a new skylight panel module.

Four of the skylight modules, above the offices, open to allow airflow for natural ventilation. These venting modules have rain sensors to monitor and control the skylights during inclement weather. And because wind gusts are a precursor to storms, sensors also detect high wind changes and close automatically. The skylights are set to close during winds in excess of 20 miles per hour, or at the first drop of rain, whichever comes first. They can also be opened and closed manually.