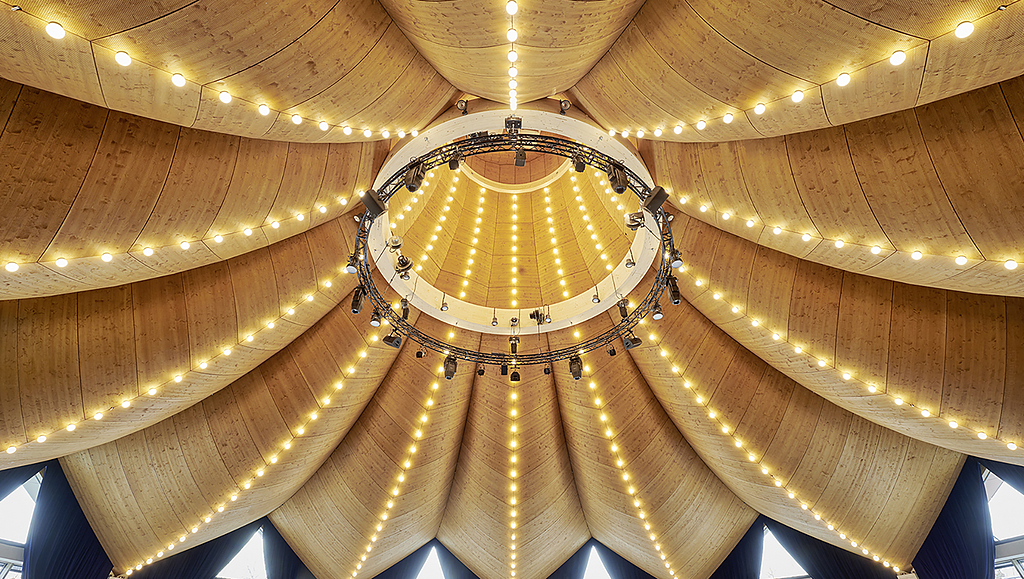 The 26-metre-high tower in a curved timber supporting structure is the eye-catcher of the building and yet another exceptional Free Form construction. The new building, inspired by architects Carlos Martinez Architekten AG, was described as a bold, innovative design by Rapperswil councillor Thomas Furrer, Head of Construction, Transport and the Environment. The cantilever roof, designed as a prismatic shell structure, is surrounded by irregularly shaped sheet metal sheds. The tower is clad with a metal facade.

In addition to the planning, Blumer Lehmann also responsible for the 3D modelling.

«We generally like to work with timber. For scheduling reasons, but primarily for environmental reasons.»
Carlos Martinez, Architect | Carlos Martinez Architekten

Multifunctional use of Knie's Magician’s Hat

The sea lions previously kept in the Otarium left the children’s zoo at the end of October 2019. Instead, the magician's hat will host events with a new direction all year round. With a capacity of approximately 500 people, the building is suitable for a variety of uses and is equipped with a retractable stage platform and an extending stand.

«I come into the magician’s hat every day. I love this building. Everyone who enters the building says wow!»
Franco Knie Senior, Co-owner | Gebrüder KNIE, Schweizer National-Circus AG

Production of the elements for the timber supporting framework

The timber elements for the Knies Zauberhut were produced at the Blumer Lehmann factory and fully assembled straight away. The facade was also fitted directly onto the elements by their project partner, the metalwork specialist Brönnimann. The prefabricated components were then delivered to the construction site and assembled there.

Assembly on the construction site

The weight and size made assembly of the large elements of the supporting framework extremely challenging. The large roof elements weigh approximately 4 tonnes and the final component, the hat, weighs almost 20 tonnes. The outer construction was very challenging in terms of the precision required during assembly. However, it was eventually possible to join it all together to form a circle.

If you desire more news about Blumer Lehmann register here for their newsletter.